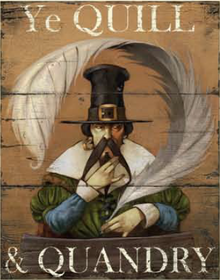 Ye Quill & Quandry is an inn situated in Brightwall. It is the only pub in Brightwall, and therefore is a highly popular place for villagers to congregate. The Hero of Brightwall, Walter Beck and Samuel (at one point) use the inn's services. The Hero of Brightwall regularly met up with Sir Walter here in order to formulate plans to gain followers, in order to further the progression of the rebellion, and is where The Hero finds an unconscious mercenary - Clarence, who under Sir Walter's instructions, they impersonate, in order to gain access to the Mercenary Camp in the quest In Wolf's Clothing.

Like the other taverns in Fable III, the fate of Ye Quill & Quandry depends on the rulings of the Hero when they ascend to the monarchy. If the Hero outlaws alcohol, the pub is forced to sell only fruit juice. In addition, if the Hero doesn't bail out the economy, the pub's furniture becomes dilapidated and worn-down.

Retrieved from "https://fable.fandom.com/wiki/Ye_Quill_%26_Quandry?oldid=121566"
Community content is available under CC-BY-SA unless otherwise noted.