Witchwood Lake is a region between Knothole Glade, the Arena Entrance and the Temple of Avo in Fable, Fable: The Lost Chapters, and Fable Anniversary. This is a medium sized region, with a small, shallow lake in the middle. A bridge crosses over a gap to the Arena Entrance and a path goes up into Knothole Glade from this lake. The exit to the Temple of Avo is in the South.

Several traders go through this area despite the presence of monsters. When the player first visits the lake, he may encounter Nymphs while later on these will be replaced by Balverines and a Rock troll.

A small lake lies on the path to Knothole Glade. 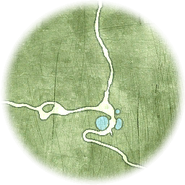 Minimap
Add a photo to this gallery

Retrieved from "https://fable.fandom.com/wiki/Witchwood_Lake?oldid=147706"
Community content is available under CC-BY-SA unless otherwise noted.