The White Balverine quest is a quest available in Fable, Fable: The Lost Chapters, and Fable Anniversary.

This gold quest will become available in the map room of the Heroes' Guild right after you’ve completed the Find the Archaeologist quest.

Knothole Glade is having a problem with Balverines. When you arrive in the area, you’ll find that the village's front gate is locked, and that the village has been besieged by a handful of the werewolf-like creatures. After you’ve dispatched them, you’ll be allowed inside, and the village chief will tell you that the Balverines follow a powerful White Balverine.

Just then you’ll learn that the White Balverine is inside the village, and while the chief will claim that it’s attacking the warehouses, it’ll probably make a beeline straight for you. You’ll have to battle it, but you won’t be able to kill it yet. You’ll just have to hit it ten times to drive it off.

After the battle, the chief will come back over and tell you that the creature’s skin “is too tough even for you.” He’ll then suggest that you talk to the wife of the last man who killed a White Balverine. However, when you approach the wife’s house at the top of the hill, the White Balverine will attack you again, and you’ll have to hit it another ten times to drive it off.

After the battle, the wife will admit that the White Balverine is actually her husband -- or, rather, what’s left of him -- and she’ll give you a Silver Augmentation so that you can defeat it. All Balverines have a weakness to silver, but White Balverines are extremely weak to it. Conveniently, the White Balverine will take that opportunity to attack again, and this time you’ll only have to hit it five times (with any weapon) to drive it off. 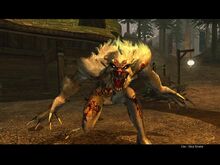 When you return to Knothole Glade, the chief will be very pleased to see you, and he’ll tell you that you’re now famous enough to enter the Arena. He’ll also give you Theresa's Letter and a book entitled The Bloodline. They’ll describe how you’re a member of the ancient bloodline and how there’s a link between you and the Sword of Aeons. 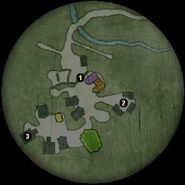