"Think you can beat me Farmboy?"

— Whisper challenging the Hero of Oakvale

Whisper is the Hero of Oakvale's childhood friend and rival in Fable, Fable: The Lost Chapters, and Fable Anniversary. She is an acrobat who fights with a pole staff. While using her agility to her advantage in combat, she can use bombs when fighting multiple enemies.

Whisper and her older brother, Thunder, were stranded on Albion after a storm wrecked their ship, and subsequently were raised in the Heroes' Guild.

Whisper is first mentioned by Weaver when the Hero of Oakvale is first brought to the Heroes' Guild, being referred to as one of their brightest young pupils. After the Hero is awakened by her, Whisper mentions that he talks in his sleep, as well as the fact that he is shorter than she had expected. She trains with the Hero when he is a boy, and the two quickly develop a rivalrous, but strong, friendship. She is constantly in the shadow of her older brother's success, but remains determined to become stronger.

Whisper and the Hero battle against each other during a few quests. When the Hero competes in the Arena, Whisper joins him at the beginning of the third round. Working side-by-side, the Hero and Whisper manage to defeat multiple Balverines, Bandits, Undead, Trolls, and even the mighty Arachanox, only to be pitted against each other in a fight to the death, thanks to the interference of Jack of Blades. The player can choose to kill Whisper or not, earning 10,000 Gold should he choose to kill her.

If playing The Lost Chapters, and the player chooses not to kill Whisper, the Hero can meet Whisper in the Oakvale tavern, where she reveals that she is leaving, acknowledges the Hero's superiority as a hero, and tells him how he has been a good friend. However, if the player strikes her in any way, Whisper tells the Hero that she is leaving, and that at first she thought that the Hero let her live out of kindness, but now she thinks it was to make her have to live with the shame.

If the player lets Whisper live, the Oracle reveals that she returns to her homeland in the South Islands, where she defends her people and is praised as a true Hero. On the way there, her ship is said to have been attacked by pirates, all of which are killed.

On occasion, a child will ask a male NPC in the game to read them the story of Whisper, for it is their favourite.

— Whisper begging for her life

Whisper mostly uses melee weapons in combat. When the Hero of Oakvale engages with her in the Arena  she uses the Assassin Rush ability. This spell is different than the one Hero of Oakvale can learn: the trail left behind is white. Whisper also uses this spell to rush forward towards the Hero and attack with her staff. Furthermore, she is also capable of using explosives in battle.

Whisper as a child.

Whisper begging for her life. 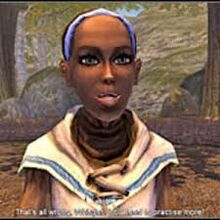 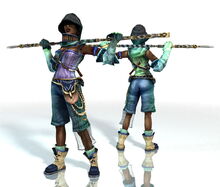 Fable The Lore Behind Whisper