Wellow's Pickhammer is a legendary pickhammer in Fable, Fable: The Lost Chapters, and Fable Anniversary.

The Pickhammer has a white cylinder pommel. The first-half of the handle is dark blue, with white circles down the handle on all sides and four black leather wrappings positioned between the circles. The second-half of the handle is a brown wood colour. The metal is a polished silver which covers the brown handle slightly, the metal also has small golden spikes where it covers the second part of the handle. The Pick part is in the shape of a crescent wave, with it being concave in the middle and having gold designs embroidered on the pick. The Hammer is a pommel in the shape of a pyramid without the triangle. The pommel is brown at the base and then is silver upwards, with gold detail.

Wellow ruled the northern ridges of the Old Kingdom. His warlords were said to have had carried pickhammers forged from strong but extremely light metal from hidden mines, very much like the pickhammer Wellow himself carried.

Wellow's Pickhammer can be obtained fairly early in the game, by performing a great deed of evil in front of the Greatwood Gorge Demon Door. This can be accomplished in 2 ways: by already being pure evil or by eating 11 crunchy chicks in front of it if your alignment is good(This Demon door's dialogue will vary when you open the door depending on which method you used to open it). 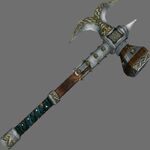