"Your choices, whether they lead you down the path of good or evil, will change the fate of the world."

Weaver was the Guildmaster of the Guild of Heroes sometime during the Age of Heroes. Weaver trained the guild apprentices and offered advice to the established heroes seeking a career through the guild's quest system.

At some point in his youth, Weaver had become a member of the Heroes' Guild. At that time, the guild's regime only allowed quests that were law-abiding and virtuous. Weaver joined his fellow guildmate, Maze, in rebelling against this regime, in hopes the Heroes could determine their own path and morality. Unfortunately, a civil war broke out within the guild, causing the loss of many heroes.

Finally, the rebellion became successful, and the war came to an end. At this point, the oldest hero of the guild, Scythe, had returned and was impressed with the balance established by the idea. Scythe recommended Weaver and Maze to lead the guild from that point forward for their "impartial serenity."

An unknown period of time later, during the Age of Heroes, Weaver took in the young Hero of Oakvale, one of the survivors of the infamous bandit raid on Oakvale. Taking him under his wing, the Guildmaster paired the Hero with Whisper, teaching them how to master the attributes of Strength, Skill, and Will. Years later, he presided over their graduation ceremony.

As the Hero of Oakvale grew older and more powerful, the Guildmaster continued to take a personal interest in his accomplishments, as well as his mission in retrieving his family members. Offering both quests to boost his renown and the occasional piece of advice, the Guildmaster also contributed to the Hero's quest by deciphering Arban's Thaumaturgica, enabling the Hero to save his sister, Theresa, and apprehend the traitorous Maze, revealed to be working with Jack of Blades.

After Jack of Blades activated all the Focus Sites, he stormed the Heroes' Guild in an attempt to claim his sword, the Sword of Aeons. While the Guildmaster tried to stop him, his attempts were in vain, and he was badly wounded.

A year after Jack of Blades was slain by the Hero of Oakvale, the Guildmaster informed the Hero of a developing situation in the Northern Wastes, which warranted the attention of the Hero. It was later revealed that this growing evil was, in fact, the resurrection of Jack of Blades.

In his attempt to open the door to Archon's Folly and destroy Jack of Blades once and for all, the Hero of Oakvale had to collect the souls of certain Heroes. It is possible that he slew the Guildmaster in an attempt to gather his soul.

Weaver is a bald, elderly man with a generic moustache and a Guild tattoo on his forehead. He is clad in a blue and gold coat, wearing what seems to be a bright plate chest piece underneath, with a cravat that gives him a regal appearance.

Several references are made in regards to the Guildmaster, in Fable II. A Russet Apple holds the description as: "An apple a day keeps the Guildmaster away."  Villagers, though rarely, will also mention that a Guildmaster could contact a Hero at any time, and remark on how the fact appears annoying to them. Gargoyles may taunt the Hero by asking him/her if he/she has any health or potions. Playing children can be heard referring to the Guildmaster as annoying, excitedly exclaiming they should kill him. Another reference made is that Bloodstone has a purchasable building named "Your Health Is Low." In the same area, drunks can be heard claiming that they received a letter from the Guildmaster.

A loading screen in Fable II mentions a rumour that the Hero of Oakvale murdered the Guildmaster, and carved "Your health is low," on his forehead.

"You don't look much like Hero material to me. But Maze knows what he's doing, I suppose."

— Weaver to the Hero of Oakvale

The Guildmaster is said to be a powerful wizard. Despite this, he does not seem to display any offensive powers, should the player choose to fight him for his soul. During this fight, however, The Guildmaster will cast several spells that will extend to his bodyguards. While an unbreakable Physical Shield spell protects Weaver himself, he will also extend a temporary one on his bodyguards. Weaver also extends the spells Heal Life, and Multi Strike causing the guards to receive healing and their sword to multiply its next hit.

The fact that he does not use any attack spells against the hero may be out of love for him, as the Guildmaster raised him from a young age. After the battle, if the hero does not accept Weaver's offer to surrender and be teleported to Lychfield Graveyard, he claims that he has "powers you can't even imagine". Despite this, the hero kills him before he can demonstrate these abilities, leaving the Guildmaster's real power a mystery. 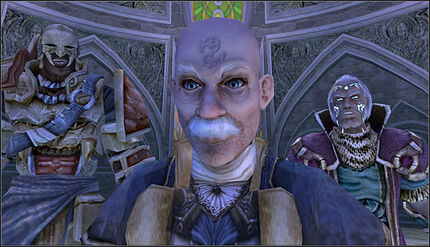 The Guildmaster during the Hero of Oakvale's guild graduation. 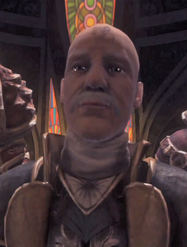