"Albion needs nothing less than a revolution."

Sir Walter Beck is a companion character in Fable III, acting as the Hero's mentor and combat trainer, as well as Logan's assistant and adviser at the start of Fable III. Walter is voiced by Bernard Hill.

Walter was a friend and companion of the Hero of Bowerstone; the two fought side-by-side in countless battles. Beck continued to serve his friend's son, Logan, after the Hero of Bowerstone's death, but began reconsidering his position as Logan became a tyrant. Eventually, Beck, having been tasked by the Hero of Bowerstone to look after his/her youngest child (the Hero of Brightwall), realised that the Prince/Princess had the potential to be a Hero, something that Logan lacked. He leads the Hero (and Jasper) into a secret passage out of the castle to stage a revolution and is the supporting character in most of the revolution quests.

Once the Hero has successfully led the revolution and becomes King/Queen of Albion, Walter appoints Hobson as their assistant while he works with Ben Finn to recruit and train an army to defend Albion against the Darkness.

At the start of the game, it is apparent that Walter has been tutoring the Hero of Brightwall in combat for a long time. He is also becoming increasingly suspicious of Logan's motives and rulings, showing distaste for the King. After hearing the Hero's encouraging or harsh speech, he teaches the Hero how to fight and how to perform flourishes. After the protesters gather around the castle, Walter speaks with Logan on their behalf, but gets beaten by the guards. After the ultimatum set by Logan, Walter decides that he, the Hero, and Jasper need to flee the castle and overthrow the tyrannical King Logan. He serves as the guide to the Hero, leading him/her through The Catacombs, the Dweller Camp, the Bowerstone Sewers, the Unknown Shore and the ancient Shadelight Dungeon. Walter subsequently leads the Hero to many places to gather allies and is shown to have connections with several key members of the revolution, even though he was closely associated with the royal family. He also proves instrumental regarding tactics during The Battle for Albion. 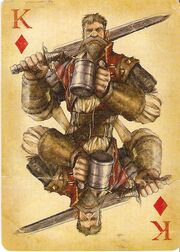 While in Aurora, the Hero and Sir Walter are exploring a cave when he is struck blind by the Crawler. After escaping to the surface, Walter begs the Hero to leave him behind. Even if the Hero attempts to drag him to safety, he will collapse, forcing the Hero to go ahead alone to look for help. As the Hero wanders through the desert, he/she sees mirages of Walter, one in which Walter tells the Hero of a personal experience which left him claustrophobic and afraid of the dark, which makes him extremely vulnerable to the forces of the Darkness. Help comes to Walter and the Hero from the Aurorans, who were alerted to Walter and the Hero's disappearances by Ben Finn.

Once the revolution is successful and King Logan is deposed, Walter and the Hero learn that Logan became a tyrant to build an army capable of defending Albion from the Darkness, which is planning to invade Albion and mercilessly destroy everything. Walter subsequently aids the Hero through the challenges of the Weight of the World, during which he presents the royal agenda and the expenses or benefits of certain rulings. He is one of the few people in Albion that understands the threat the Crawler represents, and therefore supports the Hero in their efforts to save Albion, even if it means becoming a tyrant like Logan. He also is in charge of training the Royal Army for the upcoming invasion.

Finally, after a year passes, the Crawler and its Shadows attack Albion. During the battle, the Crawler takes control over Walter, and the Hero must kill him to stop the Crawler. Though mortally wounded, Walter congratulates the Hero for doing what was right, stating that he/she has made him proud. Finally, he dies in the Hero's arms, who is on the verge of tears. After the battle, a statue of Walter is erected in the garden of Bowerstone Castle and the funeral service is held there. At the funeral, Ben Finn says "Let's send our friend off in style," and at his signal, six soldiers fire their rifles off repeatedly, honouring the great man.

Sir Walter Beck is foremost loyal to the Kingdom of Albion and to the Hero of Brightwall, who he cares for as a son/daughter. In addition to loyalty, he repeatedly demonstrates his good humour, often in the form of observational remarks, to the Hero while they travel across Albion in their attempt to start the revolution. As an old soldier, Walter is also the boisterous sort both on and off the battlefield. He charges headlong with an eagerness into battle, throwing insults and sword blows in equal measure to his enemies. Off the battlefield, he demonstrates a friendly candor to would-be allies, such as Samuel, preferably while enjoying an ale.

Sir Walter stands as a morally righteous individual, initially acting as something of a moral barometer for the Hero. He reaffirms his pride in the Hero if they perform good choices and displays concern over the well being of not only his friends, but for the nation he loves and the people who live in it. On the other hand, while Walter clearly prefers being morally righteous, he is much more understanding of morally grey choices than someone like Page- if the Hero chooses to become a tyrant to save the Kingdom from The Crawler, Walter still proclaims that he is proud of them.

Sir Walter enjoys a wide circle of contacts, including old relations, with many of the would-be revolutionaries, such as Sabine and Page. Oddly, he admits to Page during their initial meeting that he wishes he could have gotten the Hero to her sooner, indicating that he privately held revolutionary thoughts long before smuggling the Hero out of Bowerstone Castle. This is further suggested during that nighttime flight, in which he wonders aloud if he should have moved against Logan long ago.

A witty sort of man even in tense situations, Walter is usually the first to make some sort of acerbic remark to lighten the mood, even in more dangerous places such as Mourningwood Fort. He famously deviates from this behaviour, however, whenever he is forced to go through dark, enclosed spaces, such as caves. This culminates in his encounter in Shadelight with The Crawler, who preyed on these phobias until he drove Walter into a frenzied state of near madness.

Sir Walter returns in the Xbox LIVE Arcade title, Fable Heroes, as a playable character. He is unlocked after completing all of the levels, including The Credits, in the world of Albion. This also unlocks the achievement Ruler of Albion.

Sir Walter wields a sword and pistol and is one of two characters in the game to use both melee and ranged attacks. On the Weapon Tile of the Abilities Board, a Weapon Effect upgrade can be purchased for Sir Walter's sword to give it a trail effect that is very similar in appearance to the pools of darkness encountered in Shadelight.

Sir Walter Beck, the Hero Doll for people with balls. Walter himself was a loyal servant to the Hero of Bowerstone, and later a mentor to the Hero of Brightwall. His bravery, his skill with pistol and sword, and his fulsome, well-maintained beard mark him out as one of the finest men-at-arms in Albion. Boxed, mint-condition specimens of this Hero Doll are hard to find, as they appear to have the habit of gnawing their way out of their wrapping, apparently having been imbued with the same claustrophobia that plagued the real Walter.

"You call that a royal speech? You didn't shout, you didn't threaten, and you were far too reasonable. It was bloody marvellous!"

— Walter Beck to the Hero of Brightwall after their encouraging speech to the kitchen staff.

"A-ha! You only went and broke it! Look at that! Am I a great teacher or what?"

— Walter Beck to the Hero after they broke his sword with a Flourish.

"This kingdom needs nothing more than a revolution. It needs a new leader. It needs...a Hero."

— Sir Walter to the Hero of Brightwall, at the end of the quest, Life in the Castle.

"It bloody worked! You really are a Hero!"

— Walter Beck to the Hero after they cast the Fireball spell and opened the way out of the castle.

— Walter Beck after the Hero defeats the first Summoner hobbe in The Mistpeak Monorail.

"Looks like we can't go around this time. But I have some Magic of my own, watch and learn... BOO!"

"Ah! You can almost smell the sunlight! Isn't it wonderful? The damp, muggy, soggy sunlight. This is Mourningwood, alright. I just hope the people we're looking for are still alive."

— Sir Walter to the Hero of Brightwall, upon first entering Mourningwood.

"We made a good team back in that cave, didn't we? It's been a while since I've got stuck into a real fight. It was just like fighting by your father's/mother's side. I'd forgotten what it was like...standing next to a Hero."

— Sir Walter to the Hero of Brightwall, after the quest Mistpeak Monorail.

"We've descended into the chasms of the netherworld. Stared death in the face, and waded through things so foul, I'd rather not think about them. But this..is where it gets really ugly. And buried somewhere beneath it all, are the people, Logan has left behind."

"You can see for yourself what life outside the castle is like. Poverty. Hunger. Disease. Wouldn't you want to rebel against it all?"

— Sir Walter to the Hero of Brightwall, while journeying through Bowerstone Industrial.

"You won't see to many kids running around here. Most of them have no choice but to work. It's either that or begging."

— Sir Walter to the Hero of Brightwall, while journeying through Bowerstone Industrial.

"So, this is what Aurora looks like then? I was hoping it would be a little less... cavey."

— Walter Beck after washing up on the Unknown Shore in Aurora.

"Before we go on any further, I would just like to say one thing- BAAAAAAALLLLLLLS!"

"Sounds like the dog found something! Hm, you never know, it might be a luxury inn. Bats. He found bats. Good work boy, bats are exactly what we needed right now."

"Do you have the feeling someone's playing games with us?"

— Walter Beck to the Hero in Shadelight.

"My brigade had been pinned down by the enemy, until there was just me and two other men left. We retreated to a cave but they never came after us, they just blew up the entrance. We spent three days in that cave, no food, no light... just three men waiting to die in the dark."

— A vision of Walter to the Hero in the Shifting Sands.

"Oh balls to you all! You aren't burying me yet!"

— Walter Beck after waking up in the temple in the City of Aurora. 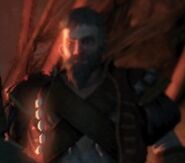 Walter in the Shadelight Dungeon

Walter walking with a torch in the darkness.

Walter is captured by The Crawler's darkness.

Walter consumed by the darkness.

Walter, possessed by the Crawler