A Villager is a citizen of Albion or Aurora. They are the people who populate the villages and other settlements in the Fable series.

Villagers in Fable and Fable: The Lost Chapters[]

In Fable and Fable TLC, villagers are very simple in appearance and behaviour. Most of them have similar clothing and physical appearance and they have almost identical reactions to the player. Some differences can be noted though, between different towns. For example, people in Knothole Glade have darker skin than people in Oakvale, Bowerstone and Hook Coast. There are also people with darker skin in Snowspire, and people in this village also wear warmer clothes due to the climate.

Few of their names are known by the player and one can only know their sexuality if they are attracted to the player. The player may marry any villager who is attracted to him if he possesses a wedding ring and a marital home. The interaction the player can have with villagers is also very simple, given most of them like and fear the same things. They also react to the player's renown, recent quests and other actions.

Villagers never carry weapons (except for mercenaries), but sometimes will fight against players who commit crimes. Nevertheless, most villagers will denounce criminals with the guards and then run away in fear.

The player's renown dictates if villagers will follow him or not, and how many of them will.

Between Fable and Fable II[]

During this period of time, more and more villagers started to carry new 'guns'. It was due to this new invention that the people of Albion believed they no longer needed the Heroes. Angry mobs of villagers slew many Heroes and burned down the Heroes' Guild with their new invention.

Interaction with villagers in Fable II is much more realistic and detailed than it was in the previous game. Every villager in Albion has a name and an occupation. Their names may be changed by the player at any time. Villagers also have a personality, which dictates their likes and responses to the player's actions. Their personality also mentions their economic status, which determines which gifts they like and sometimes in which region they live. For example, rich people may be found in Fairfax Gardens, middle-class citizens may be found in Bowerstone Market and peasants in Oakfield. 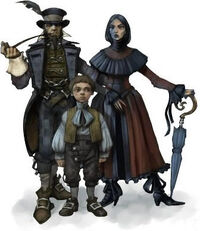 Villagers also have a detailed opinion of the Hero. This opinion includes three spectrums which are hate/love, frightening/funny and ugly/attractive. Players may see all of a villager's information by targeting him/her and pressing the Y button. The information displayed will be: name, occupation, personality, sexual orientation, what they like and dislike and their opinion of the player.

In contrast with the previous games, in which the player could only have sex with spouses or prostitutes, in Fable II the player may have sex with anyone who agrees. Sexual relationships may now result in diseases or pregnancy if no protection is used. Children have the same traits as the rest of the villagers, with the exceptions that flirty expressions can't be used on them and they can't be attacked by the player. They also won't leave the region they live in unless they are the player's children and the player sets a marital home in a different region. If a player has children with a spouse and then divorces, the children will be taken by the player's former spouse. If the spouse should die, the children protection agency will take your child away.

Villagers in settlements with law enforcers such as Bowerstone Market and Oakfield will not carry weapons, however, in places with no guards like Bloodstone, the villagers may attack the player with swords or guns if the player commits crimes. Despite this, villagers are weak and will die of a single gunshot or few hits from a melee weapon.

Between Fable II and Fable III[]

In the fifty years since Lucien's downfall, the Hero of Bowerstone became Monarch of Albion, uniting the land for the first time since the days of the Old Kingdom, which makes the villagers of Albion now subjects of the crown. In addition, the advent of Albion's Industrial Revolution sees many villagers work in the factories of Reaver Industries.

Interaction with villagers has changed once again in Fable III. Now, through the Expression Touch, the Hero of Brightwall can perform closer, more intimate expressions with a single villager, rather than a less intimate expression in front of dozens of villagers. Some of these expressions include tickling, hugs, kisses, etc. In addition, through the Dynamic Touch, the Hero can take the hand of a villager of a high relationship and take them out to explore Albion easier than ever before. Using this system, villagers can now go out on dates with the Hero, an essential part of romance in Fable III.

Like in Fable II, the villagers of Fable III each have a unique personality which may change their opinion and reaction to the Hero and his/her actions. Nevertheless, all villagers show common courtesy when the Hero becomes the new reigning monarch, averting their gaze or saluting the Hero when he/she crosses. The Hero can also change the opinions of the population through their political rulings as monarch, with popular rulings making them more beloved, and more dictatorial rulings making them more hated. Not only does this effect how the villagers of a certain location may feel about the Hero, but they will react accordingly, cheering and giving gifts or booing and insulting the Monarch as they pass by. This reaction can be different per area – for example, if one were to make rulings benefiting Albion, but exploiting Aurora, Albion's citizens will love you, and Aurora's citizens will express their hatred of you.

Once again, players can easily examine the villager's name, their sexuality, and their opinion of the Hero. The concept of a villager's favourite expression has been removed, but they still retain a favourite area, which the Hero will take them to if they go on a date. Grateful villagers, including children, will give gifts to the Hero. When interacting with certain villagers (that is, children or villagers in hardship), the Hero can also decide to donate money to them, which greatly boosts that individual's opinion of the Hero.

Like the previous games, Heroes can get married to villagers. However, the marriage system has been radically improved, with the player being given the choice as to where the wedding ceremony will be held and what kind of ceremony it will be, with the cost of the wedding depending on both the type of wedding and the location of the wedding; for example, a wedding in Bowerstone Industrial is relatively cheap, while weddings in the elaborate Millfields are far more expensive.

Like Fable II, the player is able to have sex with any villager who agrees. STDs can once again be contracted if no protection is used. Pregnancy can also occur if no protection is used, which obviously results in children. Unlike in Fable II, the death of a spouse does not mean the complete disappearance of the child. Instead, should the Hero's spouse meet an unfortunate end, the child is relocated to The Bowerstone Shelter and Orphanage, where the Hero can easily pick them up after paying a small fee. In addition, Heroes can now choose instead to adopt children from the Orphanage, rather than having kids of their own.

Villagers are only exceptionally and very poorly armed in Fable III, as those who live in large settlements can rely on the ever-present Albion Royal Army to protect them. Those that have no guard presence, such as the village in Silverpines or the town in Driftwood are in much more danger from the native hostile creatures. Villagers in these border regions wield primitively manufactured guns in certain situations. If the Hero commits crimes or aggravate the villagers they will use gunfire in Silverpines or the Dweller Camp with weak revolver-like weaponry.

Concept art of villagers of Bowerstone in Fable II.

Concept art of villagers in Bowerstone in Fable II.

Concept art of villagers in Bloodstone in Fable II.
Community content is available under CC-BY-SA unless otherwise noted.
Advertisement