Twinblade's Tent is a location in Fable, Fable: The Lost Chapters and Fable Anniversary. It is the area where Twinblade actually resides. It is a big tent with two chests in it. You fight Twinblade here during the quest Find the Bandit Seeress. During the fight between the Hero of Oakvale and Twinblade, the area is surrounded by Bandits who are watching the fight, cheering for Twinblade and jeering at the Hero. If the Hero tries to escape or accidentally gets too close, the Bandits will try to attack him. Also, an assassin can be found here in the quest Murder with a Twist.

The Bandit King's tent, usually surrounded by many Bandits. 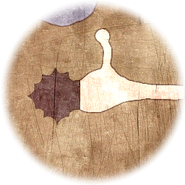