Try to Stop Jack of Blades

Try to Stop Jack of Blades is a gold quest in Fable, Fable: The Lost Chapters, and Fable Anniversary. This quest consists of the hero warping to various areas of Albion in a race to stop Jack of Blades from reactivating an ancient power from the Old Kingdom. Along the way the hero witnesses Jack's creatures engaged in a massive battle with the heroes of the Heroes' Guild and the guards from all around Albion. Whenever one side is defeated, reinforcements spawn to take their place, so trying to wipe out all the enemies is futile. Jack's army is composed of Minions, Screamers, and the Undead, all of the evil and unnatural creatures.

During this constant battle, the hero encounters Briar Rose and Thunder whom he fights alongside. If you are playing the original Fable then this is the only time you will see Briar Rose's fighting style. Through the entire quest the sky is blood red. As he fights his way through the legions of minions, the hero is mocked by Jack who says that this bloodshed is only the beginning of his "new world." This is also your last chance to do any last - minute levelling up. 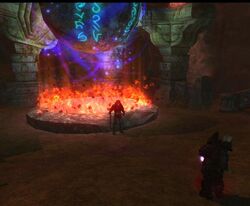 The first area you go to is Witchwood where you find Briar Rose who helps you take out some of the minions here. When you get to the focus site, you will see Jack of Blades. After he has opened a portal, you will run through it. (Note: there may be another bit before you reach the next section)

You'll appear in Orchard Farm and have to run through to Greatwood Lake, where you'll see Jack has succeeded again. You will follow him through the portal he retreats in.

Next, you'll be in the Hobbe Caves. Head towards the focus chamber and on the way there you meet Thunder, who helps you here. When you get to the focus chamber, Jack is there and he opens another portal, like the one before.

Once you run through the portal, you will end up at Bowerstone Jail. Go to the top of the hill and go into Gibbet Woods. In there go right on the pathway and you will find the last focus site where you will see Jack holding your mother, Scarlet Robe. You then teleport to the Guild.

When you reach the Guild, it is burning and you will find the Guildmaster laying injured in the library. He tells you to go into the Chamber of Fate and defeat Jack of Blades. He also says amusing things if you put an arrow in between his eyes.