Trolls are large, strong beings composed of the surrounding ground type, and as such, appear in different forms; rock, earth/soil, ice, swamp and forest.

Among the first creatures to ever wander Albion, it is revealed in the Creatures of Albion Book II that trolls are born of the land that they inhabit, which influences their appearance and their disposition. As the dragons were masters of the air and the mysterious krakens held ultimate dominion over Albion's seas, trolls were the dominant life-form on the lands of Albion.

As it was with other mystical beasts like dragons and griffins, this changed with the advent of Albion's ultimate inhabitants – humans. Trolls were, like dragons, hunted down by Old Kingdom huntsmen originally to keep the Kingdom safe, but eventually for sheer sport. Even by the time of the original Fable, trolls are relatively rare and uncommon, and some varieties of troll, like the platinum troll, are already extinct. 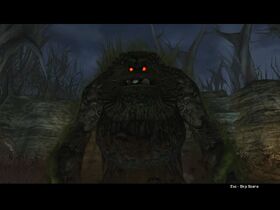 Trolls are relatively easy to defeat in Fable since they are slow, with attacks that are fairly easy to avoid. Be aware that trolls have a large amount of health.

Earth trolls are relatively straightforward to defeat. You can either hit them with as many attacks and flourishes as possible, or knock back their projectiles. The latter is tricky - use Slow Time to make it easier - but extremely effective, downing a troll in just two hits (earth troll) or four hits (rock troll) depending on where they are struck.

Rock trolls are tougher. Magical attacks are generally ineffective, and their rock attacks are much faster, and can be issued in threes. Their close quarters attack is much weaker, however, so close range attacks are effective.

Ice trolls are unique to Fable: The Lost Chapters. They are a rare, but aggravating enemy, with fast, wide-ranged attacks that cause a lot of damage. 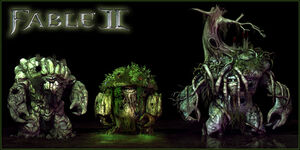 Defeat trolls by shooting their exposed nerve tendrils with magic or a ranged weapon. This can only be done when the nerves glow red, and can be difficult to accomplish, as the troll will frequently turn to face you, defending the nerves on its back. It is possible to use the area-effect version of Inferno to damage the nerves whether or not they are visible, but requires you to be very close to the troll, risking damage. Using any kind of steel to master pistol is advised because they can fire and reload faster and so you can sometimes take out 2 nerve tendrils. Also, the Blades spell works as well. If there are no hobbes in the area and the nerve clusters are exposed as the blades will go after the tendrils and, with three of them, they can deal excellent damage. It is also possible to take out a troll with a single hit using the level 5 Shock spell whenever all tendrils are exposed.

Sometimes a troll will be laughing, or roaring, or just anything that isn't attacking, and its weak spots will be red or yellow (in the latter case you'd just have to switch targets), but even a simple shot without aiming might not be fast enough or just won't hit it. This can be especially aggravating in the last round of the Crucible if you're trying to get all 8 Perfect Rounds, since, along with the hobbes, it can take up a lot of extra precious seconds. This can be avoided by utilizing Slow Time to slow the troll down and buy time to avoid its minions, if there are any, and this will help you hit its weak points. This is a particularly good strategy in The Crucible, which should allow you to get a perfect round.

In Fable III, it is revealed that trolls have finally been ousted from the cultivated regions of Albion by King Logan, who even commissioned a series of powerful hammers, the Trollblight hammers, for a campaign to exterminate every last troll from Albion. It was largely successful.

Trolls return in Fable: The Journey, revealing that while they have been forced out of mainland Albion, trolls still thrive in the wild northern frontier of Albion, known as the Edgelands.

The first troll is encountered within the caverns of Bladebarrow, with more trolls found throughout the forests and caves of the Edgelands. Trolls attempt to attack Gabriel by throwing boulders and by utilizing a rock-attack similar to the one in Fable II. In addition, trolls can summon creatures, such as rockmites and stingers to aid them.

By the time Gabriel reaches Deepgorge , the corruption forces have already taken over the many trolls that lived hidden at the bottom of the gorge exposing the power the corruption was already holding at the moment.

An Ice Troll from Fable TLC

Fable: The Journey Troll inside of Bladebarrow 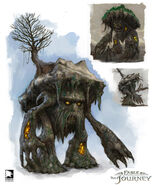