Traders are wandering merchants who travel from settlement to settlement throughout, and sometimes beyond, the land of Albion. 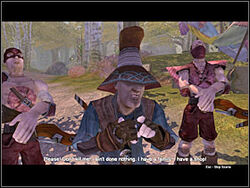 During the time that the first Fable takes place, traders were typically males, and more often than not, wore a backpack, as well as a distinct looking hat or a very large "trader-style moustache" that protruded off of the wearer's face.

In Fable and Fable: The Lost Chapters, traders can be seen travelling between towns to sell their commodities. Such commodities can vary from health potions and food to weapons and clothing. Some traders, however choose to set up trading posts, such as the ones in Barrow Fields or Darkwood. Wandering traders are often attacked and killed by bandits, or monsters, which has led some traders to hire Heroes to escort them to their destination. Normally seen travelling unarmed, some traders will still defend themselves with their fists and feet against all threats, from Wasps to Trolls.

In Fable II, traders still wander around areas such as Bower Lake. Many of them sell more specific goods and are named appropriately (e.g. Heavy Weapons Trader and Light Weapons Trader).