The Fable Wiki
Register
Don't have an account?
Sign In
Advertisement
in: Protected articles, Article stubs, Spoilers,
and 2 more

View source
watch 02:59
Wiki Targeted (Games)
Do you like this video?
Play Sound

Tipple is one of the playable Heroes in Fable Legends.

With a punch that can floor a stampeding bull, Tipple — aka The Haymaker — loves nothing more than wading into a good brawl. Inebriated for a good deal of the time, he’s a man of extremes. All fun one moment and fists flying the next. With the occasional touch of melancholic regret thrown in for good measure, probably a double measure.

Popular in every tavern he’s ever fallen asleep in, Tipple hails from a small village north of Anchor in Albion’s rural heartlands. A sweet natured child, he grew into a gargantuan adult. However, there was always something missing from his life. Village life isn’t all that exciting and it wasn’t long before the pub became his natural home. Never a small man, the confined spaces and heavy drinking led to lots of spilled pints. So it was inevitable that one day a fellow drinker would take offence and square off against the young Tipple..

With the same combination of bulk and inattention that caused the pint spill, Tipple managed to knock out his potential opponent simply by turning round to see what the fuss was about. The crowd roared, cheering his success and suddenly everyone was clamouring to buy him a drink. Never before had Tipple got so merry for so little effort. That night he made a connection that would change his life forever. With drink inside him, he became more precise in his movements, steadier on his feet and significantly better looking, better yet, hitting people equalled more liquor. From that moment on a star was born.

Soon he became a fixture in a series of boxing bouts hosted in a local barns. His victories brought him fame, but no great fortune, especially when word of his strength spread and the number of those willing to challenge him dwindled. Unfortunately even as fast as his earnings were plummeting, his bar tab grew.

One awful morning, Tipple woke up sober for the first time in years. With no fights on the horizon, he had built up quite a pile of debts. Worse still, there wasn’t a publican in the land who would serve him without first seeing the coin. It was at this most desperate low that the invitation to Brightlodge arrived.

Glory? Save a land? A large reward? Forget a higher purpose! Who needs a calling when there’s treasure to be had? Tipple has come to Brightlodge to be a Hero for the beer money, plain and simple. He figures if he’s going to go down fighting he might as well do it with a drink in each hand. 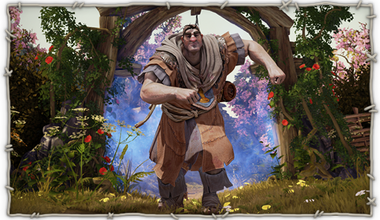