Thunder is a character in Fable, Fable: The Lost Chapters and Fable Anniversary. He is a proud and mighty Hero, a champion of the Arena, and the brother of Whisper.

Long ago, on a ship from the South Islands, Thunder and his little sister Whisper left for Albion. But the ship came upon a Kraken nest during a storm, and the whole ship was devoured. Thunder, however, took his little sister in his arms and swam to the coast, after supposedly raining thunder from the heavens to slay the Kraken. Arriving in Albion, he made a name for himself as a Hero, and became Champion of the Witchwood Arena. He was able to complete the Arena battles without taking a break, a feat unmatched by any Hero - except Jack of Blades - until the Hero of Oakvale, alongside Whisper. He was disdainful of the younger Hero (and this disdain grows to anger if the Hero kills Whisper in the Arena). Despite this, he appeared as an ally as well as an adversary. Thunder (along with Flick) was deeply in love with Lady Grey, and courted her obsessively. 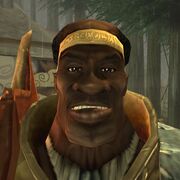 Thunder appears several times throughout the game. His first appearance is during the Hero's melee training with Whisper. After you become the new Arena Champion, you run into Thunder vying for the attention of Lady Grey who is waiting to meet you. Thunder then confronts you and you must fight him if you later choose to court Lady Grey. Another time he appears is later into the game, outside of the school in Bowerstone, where he is telling stories about himself and comparing himself to you in front of the children. He also appears briefly to help stop Jack of Blades from activating the Focus Sites.

The Hero encounters Thunder again during The Souls of Heroes quest. The Hero can choose to either fight Thunder to the death in order to obtain his soul, or take Thunder's advice and go to the Arena to look for a soul.

500 years into the future, Thunder is long dead. However, there is a potion in the game called the "Thunder Strength Potion" which confers the player 62,500 strength points. Its description suggests that the "bones" of Thunder were used in the making of the potion.

In Fable III, the sword Thunderblade's description states: "The great old Hero Thunder is said to have been able to rend the sky with this. The rumour was started by Thunder himself, and was widely discredited by his sister, Whisper." 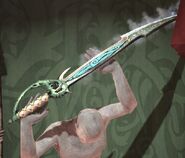 The Thunderblade sword in Fable III.

A model of Thunder and Twinblade fighting each other
Polski
Community content is available under CC-BY-SA unless otherwise noted.
Advertisement