The TYPO is a legendary hammer in Fable III. It may be found in one of the seven random weapon locations.

A weapon designed not only for fighting enemies, but also for winning the hearts and minds of civilians. Its name is an acronym for Tactical Personal Offensive Weapon. 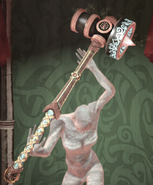 Add a photo to this gallery
Retrieved from "https://fable.fandom.com/wiki/The_TYPO?oldid=143389"
Community content is available under CC-BY-SA unless otherwise noted.