The Sentinus is a legendary Greatmace in Fable, Fable: The Lost Chapters, and Fable Anniversary.

Said to belong to the bodyguard of Archon, first ruler of the Old Kingdom, this Greatmace is as majestic as any sceptre, and powerful enough to bring down empires to their knees.

It is best to attempt to get Skorm's Bow first, as the process of getting it will greatly lower your good alignment and cause you to become evil. This will cause the cost of the donation required to drop greatly. 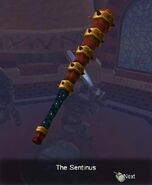 Receiving the Sentinus.
Community content is available under CC-BY-SA unless otherwise noted.
Advertisement