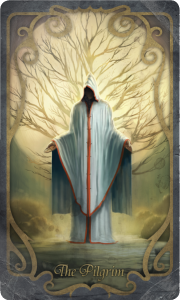 The Pilgrim is one of the five Fate Cards in Fable II given to the Hero of Bowerstone by Theresa. This one refers to Hammer, the Hero of Strength.

Use the card to listen to what Theresa has to say about it. The Pilgrim is the soul in search of spiritual truth and freedom. The white of the robes represents purity, while the red lining is sometimes seen as an expression of controlled anger. The open arms are a sign of both an open mind and a giving nature, though it is also interpreted at times as a desire for some unreachable goal. The branches that sprout in the background represent growth. Though a positive card overall, the Pilgrim stands on water, which indicates uncertainty and a need for salvation.

The Pilgrim. This Hero has great spirit, and awesome strength - but it is not yet unleashed. The Pilgrim's path is to the north.

Retrieved from "https://fable.fandom.com/wiki/The_Pilgrim?oldid=106673"
Community content is available under CC-BY-SA unless otherwise noted.