The Invocation of the Watchers, written by an unknown writer named Lemegeton, is a book that can be found after returning 10 books to Samuel for the quest The Pen is Mightier.... After returning any 10 books to the Brightwall Academy, in addition to The Book of Mysteries, Samuel will give you a quest to find this book in a trapdoor by a house in Bowerstone Old Quarter, and give you a key. 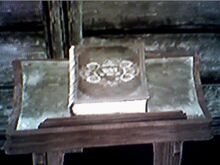 Your gold trail should lead you to a house in Bowerstone Old Quarter, with a trapdoor outside right outside it. Once you've entered to trapdoor you should see many belongings and antique, museum like things. Enter the second and only other room with three hobbe statues. In the far right corner there is a Flit Switch you must shoot. Follow it to the left corner and shoot it again, which will result in a short fight with the three hobbe statues. After finishing the fight follow the switch 2 more times. It should finish just behind the book-cases where the book sits on a pedestal.

(**) Destroyed by the Hero trying to activate the Magic Flit Switch

(***) Destroyed when the hero shoots the Flit Switch

I Conjure thee, O thou Mighty and Potent Prince of Darkness, Almadiel, who wanders in the Aethyr. I conjure thee forthwith to appear here with thy attendants, in this the witching hour of night! Stand before me in this Circle, herein inscribed. Come forth, in a fair and comely shape, to do my will in all things that I shall desire of you! Do not appear as the Shadow, I abjure thee! Here be the Seal of Almadiel, by which I command you!

Retrieved from "https://fable.fandom.com/wiki/The_Invocation_of_the_Watchers?oldid=119609"
Community content is available under CC-BY-SA unless otherwise noted.