The Development of Fable

This is a page dedicated to displaying a rough idea on the different stages of development for Fable and how it changed before becoming the game that we known. 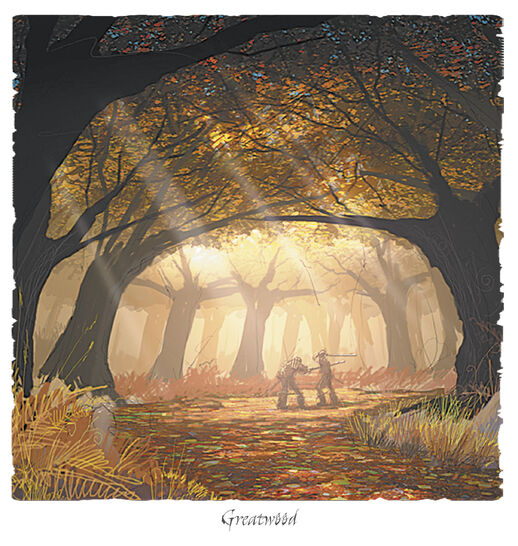 "We wanted to create a roleplaying game like no other" - a quote from the Development Diaries by Lionhead Studios for the original Fable and is the opening for the Concept Art section.

Back in 1985, two brothers named Simon and Dene Carter made a vow to each other that some day, they would do just that. It took them about 13 years to finally put their plan into action and after 2 months of struggling to come up with a name for their new game development company, Dene simply stated "Oh bugger. I don't suppose Big Blue Box sounds too stupid, does it?" and just like that, the company Big Blue Box Studios was born. The Carter brothers also managed to form a small team of people for their company along the way, who shared their passion for a unique Roleplaying experience.

Think of this as the Primordial Soup of Fable's development. When ideas were slowly being put together, yet there was no clear vision of how they wanted to achieve those goals. Concept art was being made and people where sharing their thoughts on how they wanted to approach the project. After brainstorming a variety of ideas that they wanted to try and implement into their new game, the team over at Big Blue Box started to compile the ones that they thought were the most interesting and could help make their game stand out from the rest. Though it was still in pre-production, they named this little project of theirs "The Game."

The Lionhead Dev Diaries for Fable also mentions that the game was apparently named "Thingy" at one point in development, as a joke amongst the developers at Big Blue Box Studios. Since they didn't have a solid vision for the game or a name to go along with it yet, a lot of these joke names were used. The texture for Wasps in Fable also use the name of Thingy in the game files, but according to Co-Creator Dene Carter, this is merely a coincidence.

A couple of other joke names were thrown around during this period, including the very odd code name of "Jesus 2000" which Dene says was an obscure name that he came up with one time as a joke at Peter Molyneux's house. 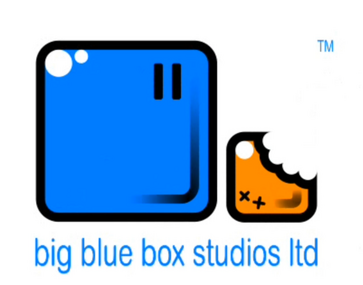 After leaving Bullfrog Studios, the likes of Simon Carter, Dene Carter and Ian Lovett would go on to make their own video game design company in 1999 called Big Blue Box Studios. They are primarily responsible for coming up with the original concept, which would later become the game Fable. The name was thought up at random by Dene Carter, who was struggling to come up with a name for the studio.

Eventually Big Blue Box merged with Lionhead Studios, who were also bought out by Microsoft. This led to the creation of the original Fable for the Xbox in 2004. 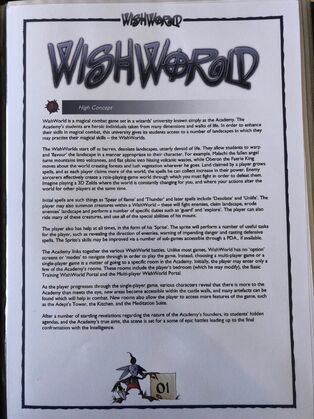 Before Fable, there was an idea by the name of WishWorld. This idea had a design document made for it and some of those designs can still be felt in the world of Fable to this day. However, its main focus at the time wasn't being a RPG. Instead, Wishworld was a magical combat game where you could change the world around you to fit your demands. If your character had water abilities you could fill an ocean with mermen then make one of them very large and ride him into a battle.​​​​​​ You could shape the world around you with ​​​​your magical abilities, An example is that you can protect your base and order creatures to protect and explore around the area.[1]

"Imagine playing a 3D Zelda, where the world is constantly changing for you, and where your actions alter the world for other players at the same time." - A quote from Dene Carter in the WishWorld design documents.

It is possible that it was meant to contain some RPG elements during this peroid, but really the game's vision was like an Action/Strategy game more than anything. WishWorld was meant to be set in a wizards' university that was known as the Academy. The students of the Academy are said to be heroic individuals, taken from many dimensions and different walks of life. In order to ehance their magical combat skills, the university would give its students access to a number of landscapes in which they may practice their new abilities.

These are known as the WishWorlds. They start off as barren, desolate landscapes, utterly devoid of life. This allows students to 'flavour' the landscape in a manner appropriate to their character. An example given in the design document, is that Malachi the Fallen Angel can turn mountains into volcanoes and flat plains into volcanic wastes. While a character like Oberon the Faerie King would move about the world creating forests and lush vegetation where he goes. Land that is claimed by a player will grow spells and as each player claims more of the world, the spells they can collect increase in their power.

According to Dene Carter, at one point in development, the "WishWorld" version of the game was temporarily renamed to Godslayer to appease mainstream publishers.

For a brief period of time, the developers of the game simply named "Heroes". While the name might suggest that the game was partially inspired by the Heroes of Might and Magic series, this isn't actually true. However, the team at Big Blue Box did use the Hero of Might and Magic font for their own design documents, but according to Dene Carter this is just another coincidence. Plenty of other names were being thrown around during this peroid. Most of which have never been publicly mentioned yet.

"I believe between the events of WishWorld and Project Ego, there was an idea we had called Heroes. Alot of names were being thrown around, at that time..." - A quote about Heroes from the game's Assistant QA Tester, Charlton Edwards.

At one point in development, the game was called Merlin and was mainly influenced by an idea that Peter Molyneux came up with. According to a PureXbox article, Dene Carter said the following:

"Peter’s suggestion was that we focus on one wizard, Merlin, but allow players to make any kind of Merlin they want. We liked some aspects of that idea and decided to push it a little further, making it into a game where players could become any kind of heroic archetype they wanted. We had initially wanted to stay away from a morphing character as we didn’t want to cannibalise the unique selling point of Black and White, Lionhead’s first game, but Peter gave us his blessing. Two of our earliest hires – Martin Bell and Kaspar Daugaard – took these ideas and ran with them, creating an engine capable of morphing detailed characters with wrinkles, tattoos, and body morphs as well as forests, grass and a bunch of other features that were quite remarkable for the time." - A quote about Merlin from Fable's Co-Creator, Dene Carter.

Development of Project EGO started on the Sega Dreamcast due to the partnership between Sega and Microsoft. However, after the Dreamcast was a commercial failure the game was instead brought to be one of the first exclusives for the Xbox. [2] The game took about four years to create, with a team of around 70 developers working on it. The main ideas of Fable were the hero visually reflects his experience and the world would react appropriately to the player's actions.

"It's gonna be the best game ever." - A quote about the game from its Managing Director, Peter Molyneux [3]

Many features promised in Project Ego were never implemented. The original concept was to give the player total freedom with an open-world game, but the final version was very linear.

A cooperative multiplayer mode was planned, but it was later scrapped. Most locations seen in the early screenshots were removed from the final game or heavily changed.

Big Blue Box wanted to create a time system in which seasons and years would pass according to the game’s time. Your character would age and the world would change to reflect this. This hyped time-feature was completely removed.

In a leaked beta screenshot, the Hero is shown stabbing a child in the head. According to Assistant QA Tester Charlie Edwards, this image was faked. The Hero just happens to be using the "plunge sword" animation the same time that a child is using a sleeping animation, which could explain why the talk option is still present. The image was never meant to be seen by the public, but due to a hack that happened in the companies early days, it was leaked.

A lot of other photos and screenshots would later release, showing what stages of development Lionhead Studios were at for Fable. Most of which can be found on the Lionhead Dev Diaries for the original game. 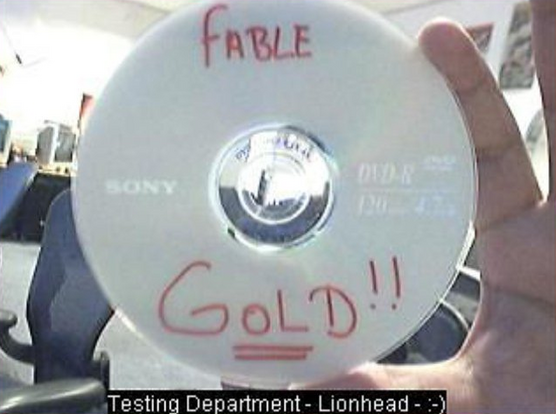 In 2004, Fable would finally be released to the world. First in North America on the 12th of September and later in Europe on the 8th of October on that same year. It was published by Microsoft Game Studios for the Original Xbox. 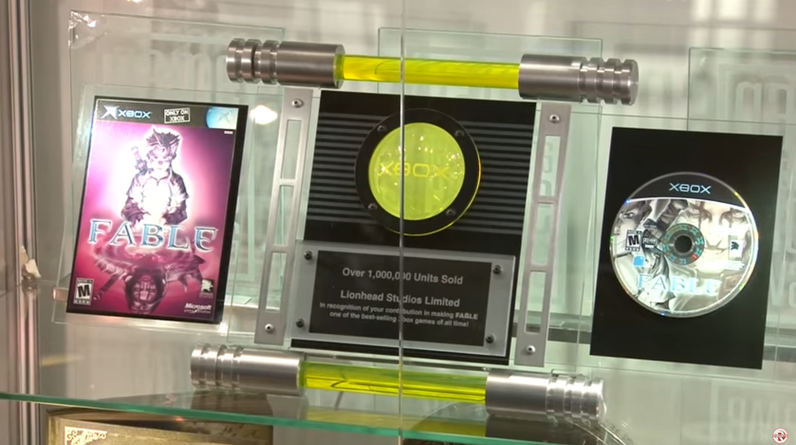 According to Franchise Manager, Ted Timmins, in the first day of its release the original Fable sold around 400,000 copies. It would later sell around 1 million copies in its first week. Before they shut down, Lionhead Studios kept a plaque at their headquarters which proudly displayed this achievement.

However, this wasn't exactly the end of the game's development. Numerous versions of the game were released with changes or improvements over the last.

After the release of the original Fable, some of the lead developers for Fable had an extra year to improve upon the original and add in content that was cut from the final version of the game. This was later known as the Fable: The Lost Chapters edition and was released for Xbox and PC.

The very first Fable game and its earlier versions all draw a lot of inspiration from other games and even movies:

Fable- Facts - What Inspired It?

Fable- Facts - What is WishWorld?

Before Fable, there was Wishworld