"Did the Blind Seer not tell you about us? Did she not warn you?"

The Crawler, referred to by some as the Nightcrawler, is the true main antagonist of Fable III. It is first encountered after the Hero of Brightwall, Sir Walter Beck and Captain Ben Finn are shipwrecked on the coast of Aurora. While Walter and the Hero trying to figure out where they are, the Crawler begins to psychologically attack them. When it first attacks Walter, it leaves him blind until the Aurorans find him and help him. Walter never seems to fully recover from the attack and this seems to allow the Crawler to possess him later on. It is only seen in physical form a handful of times throughout the game but its voice can be heard taunting the Hero and their allies during encounters with the darkness. 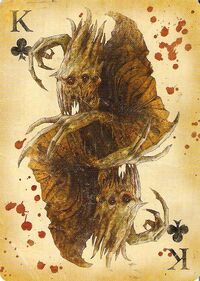 A creature of the Void, the Crawler was the chief lieutenant of the antagonistic entity known only as the Corruption. In the waning days of the Old Kingdom, following the construction of the Tattered Spire, the Crawler attempted to enter Albion through a rift created by the Spire. In a desperate attempt to stop it, three heroes, Sol, Blaze, and Stone attempted to seal the rift to stop the Crawler. The closing of this rift resulted in a gargantuan explosion that shattered the Spire, destroyed the Old Kingdom, and turned the three heroes into Willstones. Unfortunately for Albion and its people, the three heroes were not powerful enough to kill the Crawler, instead merely sealing it in Shadelight dungeon in Aurora. Many centuries later, Lucien's reconstruction and Theresa's subsequent reactivation of the Spire served to reawaken the Crawler five years prior to the events of Fable III. A year later, King Logan visited Aurora and saw his entire escort wiped out by the Crawler. Logan was nearly killed, but was nursed back to health by the native Aurorans in the City of Aurora. He promised to return and wipe out the Crawler, but never did. This was a turning point for him; it is revealed that Theresa told him that the Crawler would attack Albion and that he must prepare, a burden which led him to break his promise to Aurora and become a tyrant in Albion.

Four years later, the Hero of Brightwall also promises to help the Aurorans to gain support for their rebellion. This promise is fulfilled by formally making Aurora part of Albion and providing its people with protection. After deposing Logan, the Hero has exactly one year in Bowerstone Castle to prepare for the inevitable attack by raising up to 6,500,000 gold coins to pay for an army to fight the Crawler's minions. This is challenging if the Hero chooses to be a benevolent ruler and keep all of the promises, however, it is possible provided the Hero donates their personal wealth to the kingdom's treasury.

When the Crawler attacks, the Hero must fight their way through the Crawler's forces in Bowerstone Market. Toward the end of the battle, the Crawler possesses Walter Beck and becomes the final foe the Hero must face in the main quest-line. The Hero defeats the Crawler fatally but at the cost of Sir Walter's own life; a sacrifice Walter is glad to make. With his dying words, Walter thanks the Hero for driving away from the darkness and tells them he is proud of them.

The Crawler has the single-minded goal of destroying Albion along with the rest of the unnamed world, consuming it with darkness. It appears to find everything weak and acts as though it is doing the world a favour by destroying it. The Crawler is incredibly cruel and has no qualms with possessing people to turn them against each other or torturing them physically and psychologically. The Crawler delights in taunting its foes, often in an attempt to demoralize them.

Though a being of great and complex power, the Crawler prefers to stick to the shadows. It only reveals itself to the Hero and Walter in an effort to increase Walter's fear and paranoia, and only appears during the Battle of Bowerstone when the tide has turned against it and the Darkness.

It is revealed in Fable: The Journey that the Crawler was chief lieutenant to The Corruptor and a major figure in The Void, the same plane of existence that The Court hailed from. It is suggested through both Theresa's comments and the actions it undertook that the Crawler was instructed by The Corruptor to clear Albion for its rule, which it was cheated of by William Black.

The Crawler appears as a ghost-like being that tends to disappear and reappear as it pleases. Its body is small and thin in comparison to its oddly shaped head; regardless, it is still taller than a person even though it has a hunched posture. It has six large eyes, spikes protruding from the top of its pale head, a serrated looking mouth that stretches across the entire width of the head, long spindly legs, and very long, clawed fingers. It appears to have a hump on the top of its back, if one was to look. It appears to be a sort of backwards shark-fin.

The power the Crawler exerts over the darkness is very complex and substantial. Similar to banshees encountered in Fable II; it is able to look into people's hearts and minds, see their greatest fears and use that information to demoralise them. In the desert, he continually mocks the Hero of Brightwall after they are forced to leave Walter. The Crawler later takes the form of Walter and cries out "I'm blind!" before his voice twists to a taunting, mocking tone.

The Crawler can cast hallucinations in people's minds, even to the point where even the landscape is transformed. In the final battle in Bowerstone Market the Crawler causes the following: sand dunes appear, bodies are thrown up against glass, crates explode as darkness breaks through them, pools of darkness that spawn children appear and the sun is blocked out.

It is also possible that The Crawler is capable of driving a person insane through its voice. As Walter says in "Do the Ends Justify the Means?" "Don't listen to that thing! It'll drive you mad!"

In the Hero's fight against possessed Walter, he will attack the Hero similarly to the Sentinel. Along with having the ability to possess bodies, the Crawler can have a major influence over somebody who does not have the fortitude to resist.

The Crawler ceaselessly berates the Hero and their companions in each of its appearances. It's ranting, screaming voice echoes from the shadows. It taunts and mocks the Hero about the futility of their mission and the darkness that will overwhelm the world. Many of these are listed below.

Below are quotes that may be heard while The Crawler is possessing Walter in the story mode mission "Do the Ends Justify The Means?"

Concept art of The Crawler