The Black Dragon is a legendary weapon that appears in Fable III. Originally one of the three icons of the Triumvirate, this pistol belonged to the Sutcliff Hero of Skill. Specially crafted to exploit his unrivaled precision and accuracy in combat, the Black Dragon is a six shot clockwork pistol that is described by the Omnicron as perfectly weighted weapon that never misfires.

The Black Dragon can be acquired in the Understone DLC, at the Mercenary Camp Shooting Range, much like the Westcliff Shooting Range provided you with the Red Dragon in Fable II. To get the Black Dragon, a score of 450 points must be achieved; the legendary pistol is the highest prize at the shooting range.

The sister weapon to the legendary Red Dragon, this pistol didn't get on too well with its sibling and always accused it of being loved more. It's this inferiority complex that gives the Black Dragon much of its bite. 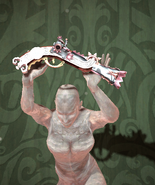 Screenshot of the Black Dragon. No augments.
Add a photo to this gallery
Retrieved from "https://fable.fandom.com/wiki/The_Black_Dragon?oldid=143158"
Community content is available under CC-BY-SA unless otherwise noted.