The Bereaver is a legendary greatsword in Fable: The Lost Chapters, and Fable Anniversary. It can be found behind a Demon Door in the Necropolis. The Bereaver is one of the most powerful weapons in the game, with a damage stat higher than The Sword of Aeons/Avo's Tear. In order to obtain the weapon, The Hero must forfeit all silver keys in his possession to the demon door.

The origins of this broadsword are soaked in mystery, as well as blood. Though it is thought to have been wielded by one of the Guild's most evil Heroes, no record has been found of his name. Some say it belonged not to a man but to a demon, and that is why it gleams with the fires of hell. 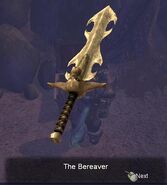 A bandit wielding a sword similar to the Bereaver.
Community content is available under CC-BY-SA unless otherwise noted.
Advertisement