The Absolver is a legendary hammer in Fable III. It is gained as a pre-order bonus from Walmart and GAME (UK), as well as from Steam.

Hammer used this weapon to mete out justice in the name of her father, murdered in the Temple of Light. The Absolver is the weapon of choice for warrior monks and angry priests 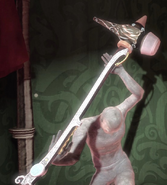 Add a photo to this gallery
Retrieved from "https://fable.fandom.com/wiki/The_Absolver?oldid=143109"
Community content is available under CC-BY-SA unless otherwise noted.