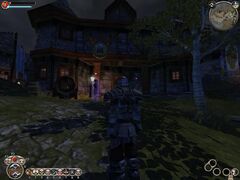 In Albion, taverns are shops that sell alcoholic beverages and also offer a place to sleep for travellers. In addition, taverns provide entertainment in the form of bards and pub games. Villagers often visit the tavern at the end of the day. More often than not, taverns are the biggest and most expensive buildings in the towns.

In Fable and Fable: The Lost Chapters, every major settlement (Bowerstone, Oakvale, Knothole Glade, Hook Coast, Snowspire and the Heroes' Guild) has its own tavern, which is shown as the green building in the map. There is also a tavern in the Darkwood Bordello. Taverns often offer goods at a slightly higher price than general stores, and this fact is frequently mentioned by villagers, who advise the player to "stay away from the tavern". Taverns are also a spot where the Hero will sometimes meet NPCs, such as Maze and Whisper. Bards can also be found in most taverns in Albion and for ten gold coins, will sing a song about the Hero and his deeds. The Hero can only purchase beer in taverns, where there is always a supply of about 50 beers for about 13 gold each. Other trade-able goods, such as beer barrels and cider crates can be bought and sold in taverns, though not at good prices. Since a great number of villagers can be found in the tavern at dusk, they are great places for heroes to show off their trophies. All taverns except for the ones in Knothole Glade and the Hero's Guild have beds in which the player can sleep for a small fee. The tavern in Bowerstone South has a cellar that can only be entered when the statue in Lookout Point is pointing towards Bowerstone. This happens around midnight. 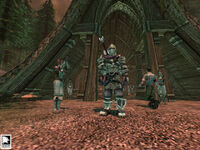 Most taverns offer a different pub game, with a different prize for players who can achieve a good score. The games are:

The other taverns do not have pub games. However, there is a building in Twinblade's Camp that seems to be a tavern. While there is no bartender, there is a gamesmaster with whom the player may play Spot the Addition and win a Twinblade doll.

Taverns in Fable II function in pretty much the same way as they did in the previous games, except for the fact that beds may now be used for free. Taverns also sell other drinks besides beer, including wine, spirits, juice and water. The quality of the drinks they sell depends on the towns economy. Each tavern also has a name and an unique pub game. Roland the bard can also be found in each tavern, and he will do the same thing as the bards in the previous games if the player gives him 10 gold coins.

The Taverns and their Pub GamesEdit

Note: The Bloody Stump does not have beds, but the player may use the ones in the nearby huts.

Taverns return in Fable III to serve many of the primary functions from the previous games. However, while drinks and food are still sold in taverns and while these facilities still offer up beds for rest, both pub games and the bard singing have been removed.

Taverns play a more important part in many of the story quests. For example, when first forming what would become the revolution, the Hero of Brightwall congregates with Walter Beck in the tavern several times to plan their next move. Much later on in the game, another tavern is held up by a gang and requires the aid of the Hero.

In addition to being available for purchase, the Hero can also influence taverns through their rulings as monarch during the quest titled The Weight of the World. If the Hero chooses to bail out the economy, for example, the taverns of Albion will be decorated with luxury furniture. Failure to do so sees the taverns downgrade to broken-down furniture. Perhaps even more importantly, the Hero also has the ability to completely outlaw alcoholic beverages, forcing taverns to sell only healthy snacks and fruit juice.

Retrieved from "https://fable.fandom.com/wiki/Tavern?oldid=124209"
Community content is available under CC-BY-SA unless otherwise noted.