The Sword of Aeons is a bloodforged ancient weapon in Fable, Fable: The Lost Chapters, and Fable Anniversary, in which securing the sword against Jack of Blades becomes a major plot line. The sword is revealed to have an ancient connection to the bloodline of the protagonist.

To be activated, the Sword requires the blood of a descendant of the Archon. Before it can be activated, however, the seal on it must be broken. In order to do so, one wishing to gain the Sword must travel to the abbey in Hook Coast with at least one descendant of the Archon (although if what Maze says while performing the ritual is any indication, it is preferable to have more) and complete some sort of ritual near the front of the temple. Once that happens, the Septimal Key appears, and must then be used to activate the Focus Sites throughout Albion; doing so reveals the sword. To achieve full power, the Sword requires the death of at least one descendant of the Archon per user. The precise reason for this is never stated, although it likely has to do with the fact that William Black was its first human wielder and his soul dwells within the sword.

The sword itself is acquired in the Chamber of Fate, after Jack of Blades is defeated. In order to wield it, the Hero must sacrifice his sister. The Hero may also opt to cast it into the vortex opened by Jack's death, which destroys the sword. In Fable: The Lost Chapters, choosing to destroy the Sword of Aeons gives the Hero the option of receiving Avo's Tear, an equally powerful sword. The sword has an attack strength of 550 points in the original Fable, reduced to 230 points in The Lost Chapters.

The oldest of all weapons. The Sword of Aeons was bloodforged long before the Old Kingdom. Once unlocked, its power is the power of all Albion.

The Sword of Aeons is an ornate, ancient sword that holds immense power. The pommel is golden-yellow, in the shape of a cone with a semi-circle attached to the base of the cone. The handle is red with golden decorations imprinted vertically down the handle, on the bottom of the handguard there is also four yellow prongs in a curved horn like shape that creates a star formation and points downwards.

The handguard is a dark grey which goes down in a way of a jester's hat with two knobs at the end of the handguard. The sword has a double-edged, polished steel blade. The blade is notched near the middle and has a thin fuller.

The Tales of Albion reveal that the Sword of Aeons originally belonged to Jack of Blades, but was stolen from him by William Black, when the latter was sucked into the Void. The sword spoke to Black, promising to help him slay the Court if he surrendered his soul. This was agreed, and Black used the sword to defeat the three members of the Court, and ultimately free Albion. 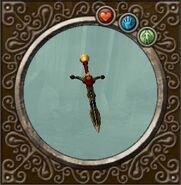 Sword of Aeons in ChocolateBox

Picking up the Sword of Aeons 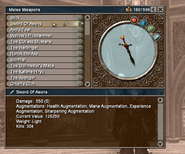 Sword of Aeons on the Xbox version of Fable.