Swift Irregular is a legendary rifle in Fable III which may be found in one of the three weapon shops.

The Swift Irregular, topping off at lvl. 5 damage if fully upgraded at 114, is among the higher-grade "common" Legendary rifles and ranged weapons available at armories, alongside the incendiary-modified Facemelter.

After trying out dozens of guns, Major Swift insisted all his soldiers were issued with one of these rifles. 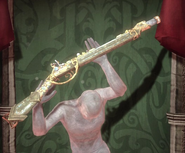 Add a photo to this gallery
Retrieved from "https://fable.fandom.com/wiki/Swift_Irregular?oldid=146419"
Community content is available under CC-BY-SA unless otherwise noted.