Strength is the name for prowess with melee weapons in the Fable universe. 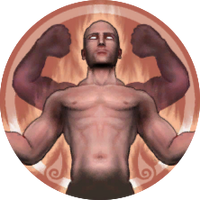 Use Strength Experience to improve your Physique, Toughness and Health. Become a better fighter, wield heavier weapons, and protect yourself from damage. With each advance you will become more muscular and powerful.

In Fable, the following abilities can be learned.

351,950 experience is required to max out all Strength attributes.

In Fable II, the following abilities can be learned.

In Fable III Strength has all but vanished during gameplay. Although Strength is still considered to be one of the three Hero attributes, it is rarely mentioned in the game. Its changes are as follows: