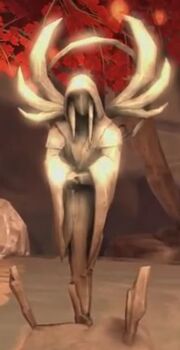 Stone, called the Hero of the Fallen, is one of the Three Heroes Gabriel encounters in Fable: The Journey. Stone's temple, known as Bladebarrow, is in the region of Miremoor.

In the final days of the Old Kingdom, Stone was considered to be one of the greatest of the Old Kingdom's champions, forming a part of the trio known as the Three Heroes. Upon the completion of the Tattered Spire, these Three Heroes went out to challenge the Crawler, the most dangerous lieutenant of the Corruptor who invaded Albion through the rift the Spire made between it and the Void. Adding her power to the trio, the group's efforts were met with limited success. Though they successfully closed the rift, they only managed to imprison, rather than destroy, the Crawler within Shadelight dungeon in Aurora. In addition, their combined power shattered the Spire, which resulted in an explosion of Will that turned the Three Heroes into Willstones and destroyed the Old Kingdom. The followers of the Three Heroes, known as the Enlightened, took Stone's Willstone deep into Albion's northern frontier, the Edgelands.

Theresa tells Gabriel that Stone's descendants were very famous champions renowned for their courage and strength, a lineage that includes the Hero of Bowerstone's friend and companion, Hammer.

Once Gabriel enters the temple, after fighting several hollow men, he reaches her statue. There, he plunges his hands into the pool to retrieve the Willstone there. He gains the power of Shards, which apparently aided Stone on her quest for justice and would serve Gabriel greatly in destroying both Albion's hostile wildlife and the Corruptor's sinister agents.

Retrieved from "https://fable.fandom.com/wiki/Stone?oldid=130262"
Community content is available under CC-BY-SA unless otherwise noted.