The Fable Wiki
Register
Don't have an account?
Sign In
Advertisement
in: Fable: The Journey Characters, Heroes

Sol, called the "Hero of Light," is one of the Three Heroes Gabriel encounters in Fable: The Journey. Sol's temple, The Shattered Prism, is found within the Whitespire Mountains.

During the days of the Old Kingdom, Sol was one of the Three Heroes, considered to be the greatest of the Old Kingdom's champions. When The Corruptor tried to send its chief lieutenant, the Crawler, through the rift the Tattered Spire opened between Albion and the Void, Sol was one of the three who set out to close the rift and stop the Crawler. Adding his power to the others, Sol destroyed the Spire, successfully sealing the rift. Unfortunately, not only could the trio only imprison the Crawler, rather than destroy it, but the destruction of the Spire resulted in an explosion that killed the Heroes and destroyed the Old Kingdom. Sol was turned into a Willstone, like his companions, which the Enlightened took to Albion's northern mountain range and hid within.

After Gabriel chases The Temptress to the Whitespire Mountains, he finds both his unharmed companion Betty and the Shattered Prism. Venturing within the temple, Gabriel defeated the Darkness that resided within and plunged his hands into the pool to retrieve the Willstone there. He gains the power of Light, which greatly aided Sol in his quest for justice and proceeds to become an invaluable tool in the fight against the Darkness. 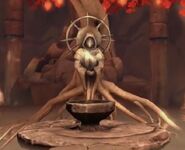 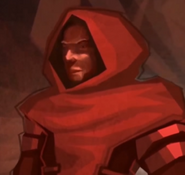 Sol as depicted by Theresa.
Community content is available under CC-BY-SA unless otherwise noted.
Advertisement