Snowspire is a location in Fable: The Lost Chapters and Fable Anniversary. It is the only known remaining settlement in the Northern Wastes. The Oracle sits at the far side of Snowspire. The Oracle states that once, Snowspire was but one of many thriving cities in the frozen land. Its warriors, steeled by the coldest winters known to man, served as some of the fiercest soldiers at the Archon's disposal. After the fall of the Old Kingdom, the Northern Wastes have been out of contact with the rest of Albion for centuries. Gradually, Snowspire was beset by invading hordes, reducing its size to a mere village.

During the Third Archon Kingdom, before the Old Kingdom's fall, it was ordered that an enormous monument must be created from an extremely large slab of rock. Four Will users (Yeron, Moryk, Calran and Avisto) created the Snowspire Oracle of it, and four Glyphs that contained the knowledge of how to use its power. The objective of this huge monument was to prepare the Kingdom for the future, while keeping record of the present and past.

Thousands of years later, after the Old Kingdom destruction, and during the Fallow Wars period, The Oracle was under imminent attack, so the four Glyphs were buried in the Necropolis, near Snowspire Village, and there they remained, waiting to be found.

The hero Scythe travelled to Snowspire shortly after The Oakvale Raid in an effort to reunite the Northern Wastes with Albion. Shortly after The Hero of Oakvale's first triumph against Jack of Blades, Scythe contacted the Heroes' Guild, saying that Snowspire was under attack from Summoners. The Hero travelled to Snowspire after using the Fire Heart to summon The Ship of the Drowned. The Hero faced Jack a final time after opening the Bronze Gate outside Snowspire.

A town established long ago deep in the Northern Wastes as part of the Old Kingdom. 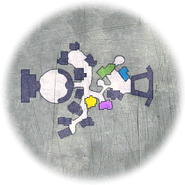 A Guard in Snowspire
Community content is available under CC-BY-SA unless otherwise noted.
Advertisement