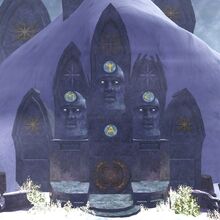 Snowspire Oracle is a large monument created by four Will users in the Third Archon Kingdom. It is located in Snowspire Village of the Northern Wastes in Fable: The Lost Chapters. After completing the associated quest the Hero of Oakvale is able to ask the Oracle about several things including the creatures and history of Albion and, if the Hero chose to spare them, the fates of Thunder, Whisper, and Theresa.

During the Third Archon Kingdom, it was ordered that an enormous monument must be created from an extremely large slab of rock. Four Will users (Yeron, Moryk, Calran and Avisto) created the Snowspire Oracle, and four Glyphs that contained the knowledge of how to use its power. The objective of this huge monument was to prepare the Kingdom for the future, while keeping record of the present and past.

Thousands of years later, The Oracle was under imminent attack, so the four Glyphs were buried in the Necropolis, near Snowspire Village, and there they remained, waiting to be found.

The Oracle and The Hero Edit

After years of peace in Albion, the ancient Jack of Blades once again manages to spread evil in the world, so the Hero's primary task is to defeat Jack. Upon reaching Snowspire for the first time, Scythe asks the Hero to find four glyphs that will allow them to speak with the Oracle in the quest Oracle of Snowspire. Finishing this quest permits the Hero to perform the Yeron, Moryk, Calran and Avisto expressions, allowing him to ask about four things, respectively: the People of Albion, Albion Lore, the Creatures of Albion, and the History of Albion.

Retrieved from "https://fable.fandom.com/wiki/Snowspire_Oracle?oldid=138116"
Community content is available under CC-BY-SA unless otherwise noted.