Skorm's Bow is a legendary longbow in Fable, Fable: The Lost Chapters, and Fable Anniversary. It was rumoured to have once belonged to the god Skorm; however, the Oracle discredits this argument by dismissing the existence of the gods Skorm and Avo. It is the most powerful ranged weapon available, due to its ability to charge up indefinitely. It has a distinctive blood red plate that covers the wielder's bow hand.

Fabled weapon of the Overberg, this Longbow carries dark and terrible secrets that seem to propel arrows with a unique power.

It is a curved Longbow which is grey with brown and gold attachments, and gold plating at the curved tips of the bow. At the middle of the bow is a dome-like handle with a red orb and matching coloured lines. 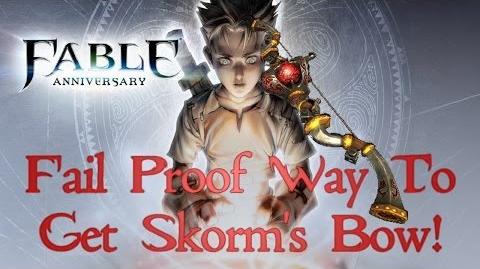 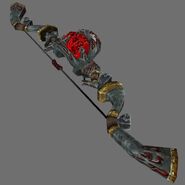