Skill is the name for prowess with ranged weapons in the Fable universe.

Fable and The Lost Chapters[] 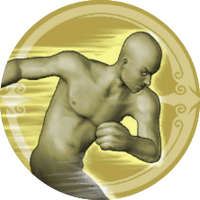 Use Skill Experience to improve your Speed, Accuracy and Guile. Become a better archer, a more nimble thief, an agile ranger, or a keen Trader. With each advance you will become more lithe and agile.

The abilities originally gained in the first Fable game, and its expansion Fable: The Lost Chapters are as follows:

330,900 experience is required to max out all Skill attributes.

The orbs in Fable II that represent Skill are yellow. A skilful Hero is adept at avoiding damage, hitting their mark and being the fastest shooter and melee combatant.

In Fable III, Skill is now referred to as Stature in the Hero status. Although Skill is still known as one of the three Hero attributes, it is never mentioned by name or referenced in Fable III. Its powers, and effects have been changed as such: