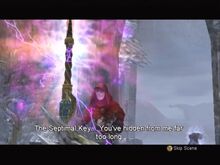 In the time of the Hero of Oakvale, Jack of Blades was after the Sword and used Maze to do the ritual whilst Jack rounded up the Hero's family (the Hero was captured for a moment but Theresa freed him with her last ounce of Will). Maze finished the ritual, and Jack got the key. He then proceeded to activate the Focus Sites.