Screamers are a type of enemy in Fable, Fable: The Lost Chapters and Fable Anniversary.

They resemble old hags with ragged cloaks and float in the air. Their only attack is a level one Drain Life Spell that takes a bit of your health. They are recognized by their screams and moaning faces. They're resistant to all physical attacks, but extremely vulnerable to any damage-increasing augmentations, to the point of being killed in a single hit by any weapon with 2 damage-increasing augmentations.

A brief description of screamers is given in the book "Creatures of Albion Book I":

Horrific entities caught in the netherworlds. Screamers have long struck fear into the population at night. They roam the land and are dangerous in their attacks.

These unfortunate beings were once men, Will users who dared to oppose Jack of Blades. They were cursed never to find rest except by torturing the souls of the dead and feeding on the lifeforce of the living. But their true nature is only hinted at in our reality. Their true power is in the Realm of Death, where souls must pass before reaching their place of torment or peace. Every person who dies in this world must escape their screams before finding their own rest.

You first encounter them in Hook Coast where you see them continuously respawn during your fight with Maze. They also spawn during the Try to Stop Jack of Blades quest alongside minions and Undead.

The hero encounters an infestation of screamers if he chooses Collecting your Mother's Soul. During the quest, there's an upgraded version of the screamer that can continuously drain your health even from a distance, although only one will spawn at a time. After that quest or the alternative, they can sometimes be found in Lychfield Graveyard. 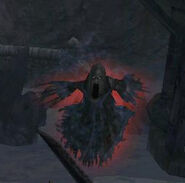