"Knothole Glade is overrun by Balverines, I wish Scarlet Robe were here, she would have slain them all."

Scarlet Robe was a powerful Hero and Champion of the Arena, originally from Knothole Glade, known best for slaying balverines. She was the wife of Brom and the mother of the Hero of Oakvale and Theresa.

Hailing from Knothole Glade, her autobiography describes her first encounter with a balverine at the tender age of fifteen, in which she surprised the elder warriors of that township by killing a particularly fearsome balverine with a simple piece of wood. Hailed among the greatest Heroes of Knothole Glade, she then went to mainland Albion and trained under the tutelage of the Heroes' Guild.

Upon her graduation from the Guild, Scarlet Robe quickly established herself as one of the greatest heroines in Albion's history up to that point. The book called The Pale Balverine describes her successful take-down of a white balverine with a silver arrow, while it is mentioned elsewhere that she participated in the "Great Balverine Extermination." Perhaps in recognition of her abilities, she was invited to fight in the Witchwood Arena, where she emerged the first female champion in arena history. After a battle with twelve Balverines, Scarlet Robe was found in a near-death state by Brom, a woodsman from Oakvale who proceeded to take her in and nurse her back to health. In time, they married and had two children: the boy who would become the Hero of Oakvale and Theresa.

Scarlet Robe is first mentioned when Theresa excitedly states to the Hero of Oakvale that they should get home, for their mother would be home for Theresa's birthday party. However, just as the two begin to head home, Jack Of Blades attacks the village with bandits. Knowing their lineage as members of the legendary Archon's Bloodline, Jack of Blades sought them out in an effort to use their blood to unlock the Sword of Aeons. While her husband perishes in the invasion, Scarlet is caught, interrogated, and imprisoned in the Bargate Prison.

Her son, now a Hero himself, eventually frees her for a brief period of time. However, Jack catches and imprisons Scarlet Robe once more, until the Hero breaks her out a second time, at which point she goes looking for Theresa after unlocking power hidden in her son's veins. Unable to evade Jack for long, Scarlet Robe is soon captured, again. During the battle at the Heroes' Guild, Jack slits her throat just as her son arrives to rescue her and uses her blood to acquire the Sword of Aeons‚ enraging The Hero.

A year later, the Hero of Oakvale found himself facing the return of Jack of Blades in the Northern Wastes. In order to open the Bronze Gate and confront Jack, the Hero needed to find souls of a certain criteria, one of them requiring the soul of THE HEROINE. At this point, the Hero can return to the Memorial Garden and clear the area of Jack's Screamers, dispatched by the villain to torment Scarlet's spirit. Once the Hero defeats the Screamers, Scarlet in turn offers her soul up to the Hero. The decision is up to the player.

After her death in Fable: The Lost Chapters, a statue of Scarlet Robe can be found in the Oakvale cemetery, in place of the former bandit statue.

Theresa mentions that by the time the bandits reached her during the village raid, she was already crying, watching as they dragged her mother away. She adds that this was the last thing she saw with her eyes before being subsequently blinded.

"...She was the first female hero to become Arena Champion." 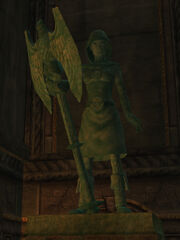