Rook is one of the playable Heroes in Fable Legends.

Grizzled and determined, Rook is a seasoned warrior hewn straight from the granite of the mountains he’s spent his life patrolling. A veteran member of the Strangers, he’s made the long journey south in response to a mysterious call for Heroes. But with Heroes long thought vanished from Albion, Rook is determined to learn more about this summons, the threat that prompted it and his role as a . . .Hero?

Though duty calls him to the green fields and lush forests of the South, Rook’s heart belongs to the bleak northern landscape of the Deadlands. This desolate corner of Albion is patrolled by the Strangers, an elusive group of men and women* who act as an army, police force and communications network for those travelling across or living along the edges of this harsh environment. As these warriors walk the northern mountains and plains alone, the Strangers’ keen eyes are ever alert for danger to fight and tankards to drain. Armed with only an icy stare and their trusty ‘Catsgut’ repeating crossbows (‘hard bows for hard people’), the Strangers are dedicated to keeping the people south of the Deadlands safe (mainly by ensuring that the strange creatures found there don’t head there to meet and eat them).

A born leader, Rook believes in honour, justice and the sort of sensible short haircut required for hand-to-hand combat. Now he’s down in the softer South, Rook sees it as his job to bring a little northern common sense to all things, and will speak his mind on this when he feels he has to. Always direct and to the point, Rook is a man of few words (and the occasional hand gesture), but you will always know where you stand with him. You’d just better hope that’s not standing at the wrong end of his bow. 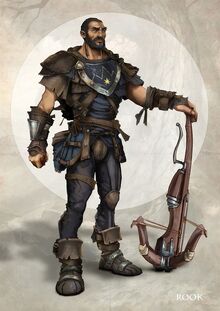 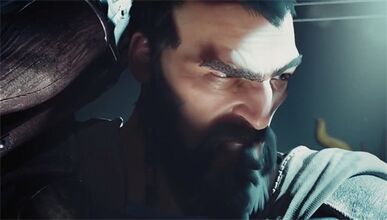 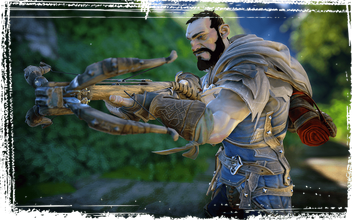 Retrieved from "https://fable.fandom.com/wiki/Rook?oldid=139528"
Community content is available under CC-BY-SA unless otherwise noted.