Return to Hook Coast is a gold quest in Fable, Fable: The Lost Chapters, and Fable Anniversary.

Before being abducted by two minions, your mother found a way of disabling the barrier, at the entrance of the ruined abbey at Hook Coast, that stands between you and the "key" - a relic that is needed to claim the Sword of Aeons. She found a copy of Arban's Thaumaturgica, a book that describes forgotten ways of erecting and disabling force fields in Hook Coast. However, it is written in an archaic language that you don't understand. The Guildmaster, however, does. 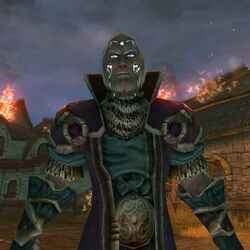 Taking this quest comes with a stipulation: you'll have to "forsake" all other quests its expense, as it is much too important. This is somewhat misleading. The quests that you have "forsaken" will become available again after you battle Jack of Blades. There will be some tough fights ahead, so consider completing any unfinished quests, so as to make your character as powerful as possible beforehand. Otherwise, accept the quest. After accepting the quest, the Guildmaster will tell you to head back to Hook Coast, where once you are in the presence of the barrier, he will read out the correct passage in the book, for disabling barriers, over your Guild Seal.

Once in Hook Coast, you will view a cutscene of the villagers evacuating from Screamers. After you approach the barrier, the Guildmaster will disable the barrier by reading to your guild seal. Next watch the cutscene.

Maze can be a tough foe. You will have to engage him multiple times. After a few hits he teleports away to a new location in the area. At the beginning of each engagement, he puts up a shield and can't be damaged. Once the shield goes down, then he's fair game. He does a lot of damage with his Enflame and his lightning is stronger than the one the Hero can obtain, even at max level (Maze's lightning does multiple damage in less than a second). He also has a projectile spell.

If he teleports to the lighthouse, simply breaking down the door of the lighthouse is the best way to get to him, if it is closed. You will gain some negative points, but so far it seems to be the only way to finish Maze, if you didn't manage to deplete his HP before he teleported to that location.