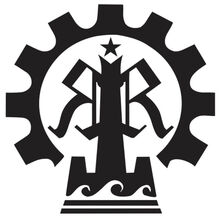 Reaver Industries is a factory brand and business monopoly owned by Reaver in Fable III. It is evident from the sheer amount of Reaver Industries products and factories that the company has powered Albion's Industrial Revolution at the expense of the people.

The company has its roots in Faraday Industries, a business set up by Ernest Faraday who is credited as the Father of the Modern Age, Hero of Industry, and Loving Parent to all things Clockwork. Faraday Industries, operating under the slogan, "Faraday Industries-Where Faraway Dreams Become Reality!" was responsible for many early advances in the Industrial Age, including transforming Bowerstone Slums into a happy and productive place, and constructing the Mistpeak to Millfields Monorail. Faraday also opened a theme park on his home Clockwork Island to showcase his creations. Commander Milton mentions that people used to line up for hours in Bowerstone to witness Faraday's work, while Faraday himself simply was content making people's lives easier and happier.

Unfortunately, after King Logan rose to power, Faraday Industries soon found itself ended after Faraday refused to activate an army of clockwork soldiers for Logan. Faraday was promptly arrested and imprisoned at Ravenscar Keep, while his industries were confiscated and transferred to Reaver. Faraday's name was also stricken from all official records.

Reaver Industries is notably infamous for child labour, slavery, deplorable working conditions, and extreme minimum wages, which resulted in Logan giving control of all industry to it and transformed the company into an unstoppable monopoly. When the Hero of Brightwall becomes monarch in Fable III, you can choose to keep your promise to Page and abolish child labour, resulting in Reaver opening a school in a former factory. However, that would require a sum of gold to be fronted for the project. Reaver proceeds to represent Reaver Industries' interests in the first year of the Hero of Brightwall's rule as monarch, suggesting a series of morally grey choices to earn money for the kingdom at the expense of its people, which include choices like breaking past promises, exploiting the people, and tarnishing the environment for the sake of resources. It is impossible to get rid of the company, and if it wasn't, it would possibly be game-breaking, as Reaver Industries is the contracted builder for everything you order as monarch.

Reaver Industries returns as a prominent background force in Fable: The Journey. In the fifty years since the start of the Hero of Brightwall's rule, Reaver Industries has only grown more lucrative and powerful, building a series of mines in Deepgorge, the great factory-town of Bastion and the expansive Reaver's Reach bridge. Both Fergus and Betty also admit that many of the youth have left their home to seek their fortunes in the factories of Reaver Industries, something that Theresa readily doubts. The massive flood of refugees fleeing the increasingly-dangerous Edgelands no doubt also proved lucrative for the unscrupulous company.