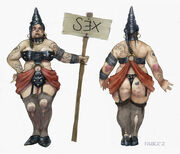 A prostitute is someone you can pay for sex in Fable: The Lost Chapters, Fable II and Fable III.

In addition, if you own a complete dress and find the red wig, you can become a prostitute. This only works if you have the complete dress outfit, red wig and get hired by the Madame.

"I'm only doing this to get through Alchemy School."

— Heard from a Prostitute in Fable II

Prostitutes in Fable II can be found in Bloodstone, Westcliff and Bowerstone Old Town. Prostitutes that can appear in Westcliff and Bowerstone depend on the player's choices; Bowerstone prostitutes exist under Nicky the Nickname's rule. Westcliff prostitutes are only there with Barnum's redevelopment after returning from The Spire. You have to pay ten gold in order to have sex with them and you get evil points if you do. Having unprotected sex with a prostitute leads to infection by STDs. You also risk being robbed, losing up to 10,000 gold. Prostitutes are eligible marriage candidates. Male prostitutes may also be encountered in Bloodstone; they can be identified by the Lad of The Night Outfit they wear. All prostitutes, both male and female, are bisexual.

In Fable III, prostitutes can be found by default in Bowerstone Old Quarter and the Mercenary Camp. There is a prostitute across from Harried House to left of zone entrance and one next to I Know We Can Make This Work Manor at end of the row of stalls in Bowerstone Old Quarter. The prostitutes in the Mercenary Camp are located in two places: one across from Coward's Den and one directly in front of Jango's Badger. If the Hero chooses to turn the Orphanage into the Whore House, they can also be found there.

You can have sex with prostitutes in one of two ways. You can simply hold their hands and lead them to a bed, or you can use the "Sex Invite" option with shows up as RB in the Interact screen. This option only comes up if the prostitute is in a certain location. Either way will cost 10 gold per prostitute per time they sleep with you.

Fable III Concept Art cut from the game
Add a photo to this gallery
Retrieved from "https://fable.fandom.com/wiki/Prostitute?oldid=145770"
Community content is available under CC-BY-SA unless otherwise noted.