Page is a character in Fable III. She is one of the active followers of the Hero of Brightwall. 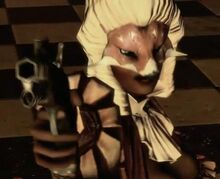 Page is the leader of the Bowerstone Resistance, an underground organization working against King Logan. Page and the rest of the resistance live in the privacy of the Bowerstone sewers. Page puts her resistance duties above all else, having witnessed first hand the injustice and suffering that Logan has imposed on the common folk. Though Page is never quick to trust a stranger, she is still compassionate and cares for her people.

Page grew up very poor in Bowerstone Industrial, back when the smoke from the factories was just starting to blacken the air and the detritus of the trade ships was just starting to pollute the waters. Sometimes she would sit on the edge of the docks and watch as industry grew in Bowerstone, never dreaming that what she saw was only the start of something bigger, stating that a child dreams of things getting better, not worse.

Her father left her family when she was eight, and her mother fell ill when she was barely eleven. She ended up working in the factories next to her older brother, Cedric, who watched out for her but died a year later due to a machine accident. Her mother died shortly after, and with no one left, Page began to live in the factories, which no one was aware of at first.

She would be found underneath the floorboards or behind steam powered machines, reading by candlelight, which was her only escape from the hell around her. She didn't have whole books though; the only reading material she had was discarded pages she'd find washed up on the docks, which she'd dry out and treasure, thus earning her the nickname Page from the other factory workers.

Wanting to go 'where the books lived', Page sought out an order of monks that were on the outskirts of Bowerstone, being told that they were very learned and very loving of books. The monks accepted her into their order, teaching her how to think and how to fight. Page decribed them as devastating, but the gentlest of souls, only fighting to defend themselves or to offer protection for the helpless.

Once Logan's tyranny was in full force, one of the first things to go was the order of monks. They refused to leave however, and one night awoke to find their sanctuary ablaze. Those that escaped the fire ended up being shot by Logan's men. Page, left as the only survivor, returned to Bowerstone Industrial, determined to not let others suffer under Logan's reign like she had, forming the Resistance, which was dedicated to bringing Logan down.

After recruiting Major Swift and the Swift Brigade, the Hero and Walter Beck travel to Bowerstone to recruit Page and her Bowerstone Resistance. Meeting the group in the sewers of Bowerstone Industrial, Page ends up relieving the stand-off between the Hero and her soldiers, who initially thought that the Prince/Princess was actually a spy. Initially unimpressed and distrustful of the Hero, Page asks him/her to prove their worth throughout Bowerstone Industrial, to better help the people. After the Hero finishes a series of quests of their choosing, Page is readily more impressed and is willing to give the Hero a chance. She helps you infiltrate Reaver's Mansion in order to save some of her captured rebels, only to in turn be thrown into Reaver's Wheel of Misfortune, an arena filled with dangerous creatures in which to entertain his guests. Fighting together for four harrowing battles, Page saves the Hero of Brightwall's life by shooting a Balverine, which was about to attack them, during the fifth and final round. Although unable to kill Reaver, the Hero's performance in the arena convinces Page to join him/her, asking for a promise to improve the lives of Bowerstone's citizens. After the Hero returns from recruiting more allies in Aurora, Page formulates the strategy and fights in The Battle for Albion, which ends in victory for the revolution.

During the second part of the game as monarch, you meet with Page a number of times, where she will argue for helping the people. This puts her in direct opposition with Reaver Industries and its eponymous founder, who continually suggests way for the Hero to save gold at the expense of the people. In an effort to save up enough gold to successfully fight off the Crawler, the true antagonist of Fable III and the reason Logan became a tyrant in the first place, it is up to the Hero to choose whether to support Page, causing you to lose gold from your treasury, or to support Reaver, which will save or earn you gold.

The proposals she will ask you to do when you become King or Queen are:

Agreeing with Page on the majority or all of her proposals will make you and her more close. You will also become more virtuous. No matter what path the Hero chooses, Page will also help fight the crime lord Nigel Ferret. Page is also among the allies in the War Room who will fight The Darkness in Do the Ends Justify the Means? She is also present at Sir Walter's memorial if the Hero of Brightwall has not broken their promises.

Shortly after the revolution and the defeat of the Crawler, Page is tracked down in the Industrial district of Bowerstone by Ben Finn. Restless and eager to begin travelling again, Ben asks Page to join him on a new series of adventures; unfortunately for the former soldier, Page sees little appeal in aimlessly wandering Albion and rejects the proposal. Perturbed by Page's refusal to join him, Ben Finn decides to go adventuring on his own.

Later on in Ben Finn's adventure, once he has discovered that the leader of Reaver's army of Half-breeds is actually being lead by his missing brother William Finn, Ben and Reaver strike a deal with each other - Reaver will cure William and set him free if Ben agrees to never again help out the citizens of the besieged town of Blackholm and to assassinate Page. Ben Finn, slightly reluctant, nevertheless agrees.

Setting out for Bowerstone, Ben Finn finds Page fighting several thugs in The Cock in the Crown pub. Escaping with Page, Ben Finn successfully convinces her to join him, claiming that they will set out to save the people of Blackholm from the Half-breeds and the warlord named Droogan. Page readily agrees.

Travelling to Blackholm, the two make camp and Page seemingly falls asleep. With Ben struggling with his duty, Page reveals that she had her pistol trained on Ben the entire time. Though Ben tries to explain his plight, the two are interrupted by an ambush from the Half-breeds, who knock Ben unconscious and drag Page back to Reaver's Manor. She is set to be killed by the Half-breeds for Reaver's amusement, but is saved by the gnome that has accompanied Ben, who destroyed Reaver's control mechanism that bent the Half-breeds to his whim. Reaver nonchalantly shrugs off the debacle, stating that they will succumb to their animalistic natures and wipe out Blackholm. Rushing to the defence of the people of Blackholm, Page joins Ben in the fight against William, only to be knocked unconscious by the creature's strength. Nevertheless, Ben saves the people of Blackholm, killing his brother and the rest of the Half-breeds with a well-placed shot to a grenade.

A week later, Ben finds to his surprise that Page left Blackholm without him, leaving a note asking Ben to leave her alone. However, Ben's gnome ally reveals that Page wanted Ben to accompany her back to Bowerstone, but she didn't know how to ask.

Fable: Edge of the World[]

Nearly a decade after the revolution and the successful defeat of the Crawler, Page still serves her King and ally, the Hero of Brightwall. Though the Hero is set to marry Laylah, a friend of Page, the ceremony is interrupted by Shan, an envoy from faraway Samarkand that reveals that the Darkness has returned there. Perturbed, the Hero decides to set out on a military expedition to rid the world of one of it's greatest threats, leaving Page and the soldier Jack Timmins to safeguard his kingdom and protect his new bride. Unfortunately, Laylah increasingly falls under the sway and influence of the recently returned Reaver, ordering both of her protectors locked up after recieving forged letters indicating that the duo were planning to take over Albion.. Page later managed to free both herself and Jack Timmins after knocking out Laylah, who demanded to know why her closest friend would betray her. Once Reaver usurps Laylah, however, she realizes that Page was right all along, sending out the Hero's dog to find Page with a message stating she would help Page when the time came.

"Put your weapons down! I thought I gave the orders round here, Kidd."

"I've never trusted a soldier in my life, I'm not going to start now."

— Page to Ben Finn, after he has claimed he shot three Hollow Men with one bullet.

"You know, for a prince/princess, you're a pretty decent person. People out there are starting to believe in you."

— Page to the Hero of Brightwall.

"Thank you for taking an interest in my social life, but we have even bigger problems now."

— Page to Sir Walter, after he has stated that he knew herself and the Hero of Brightwall would become friends.

"I just love how soldiers can come in and out of our secret hideout now. Whatever you do, please don't let Mr Finn follow you. I've had enough of him for one day."

— Page to the Hero of Brightwall, after she has rebuffed Ben Finn's offer for him to stay and make sure "no one spies on her".

"I've had enough target practise to last me a lifetime!"

— Page to the Hero of Brightwall, during the third round of The Wheel of Misfortune game.

"Do you have any idea who this is?! This is Logan's brother/sister. The prince/princess."

— Page to Reaver, after he has propositioned the two to join him for a "private party". 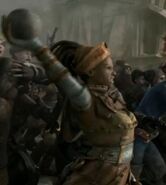 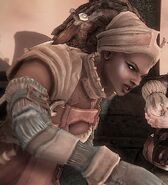 Page in the game.

From left to right: Page, Ben Finn and Kalin planning their attack
Español
Community content is available under CC-BY-SA unless otherwise noted.
Advertisement