The Old Graveyard Path is the path past the Demon Door leading to the Circle of the Dead in Fable, Fable: The Lost Chapters, and Fable Anniversary.

A secret path through the graveyard of Lychfield, this passage ultimately leads to a secret entrance into Bargate Prison. However, the Old Graveyard Path is completely sealed off, only accessible through a Demon Door that refuses to open unless it gets approval from Nostro, the once-ruler of Albion, founder of the Heroes' Guild, and "Keeper of the Door."

This passage was eventually opened by the Hero of Oakvale, who sought out a way to enter the infamous Bargate Prison without alerting the guards so he could attempt to rescue his long-lost mother, Scarlet Robe. Once in the path, the Hero had to fight through an endless horde of Undead, who proved to be a persistent and bothersome nuisance. Despite their best attempts, the Hero made it to the Circle of the Dead, promptly passed the challenges presented there, and reached Bargate.

A year after he defeated Jack of Blades, the Hero of Oakvale needed to gather three souls to open the Bronze Gate and defeat the reincarnated form of the villain. In order to collect "the oldest soul," the Hero may have traversed the Old Graveyard Path, contending with not only the local Undead, but a legion of Minions as well. Despite the clash of the two armies, the Hero managed to reach the Circle of the Undead once more, defeating Nostro in fair combat, claiming his soul, and leaving the buried of the Old Graveyard Path undisturbed.

An ancient path strewn with dead vegetation. The air is thick with a rotten stench. 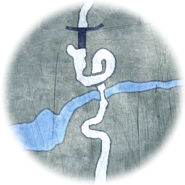