"Deep in the forest of Albion lay the small town of Oakvale, unchanged by time and untouched by the sword."

Oakvale is a small town in southern Albion in Fable, Fable: The Lost Chapters and Fable Anniversary. It was the home town of the Hero of Oakvale.

During the childhood of the Hero, Oakvale was a small developing village on the southern shores of Albion. The village is found amongst the cliffs by the sea. During its early period, Oakvale had only four houses, a general shop, a weapons store, and a tavern. The shops were located in the centre of town surrounding a large tree. A small tilled field with a scarecrow is found to the west of the village gates. To the southeast of town, three barns had been built to store food and supplies. Oakvale seemed to be a secluded village in its early years. The gates were shut occasionally and the town featured no Cullis Gate, hinting at its relationship with the Heroes' Guild.

The first major event in the village's history took place on the same day as the Hero's sister, Theresa's birthday. Bandits from a nearby camp raided the village, burning it to the ground. There were few survivors. The most important of which was a boy who would later become the Hero of Oakvale. A short while after the village was burned, folk from the neighboring countryside began to rebuild Oakvale. In a process which took nearly ten years, the small village had been rebuilt and expanded far beyond what it once was. This time of reconstruction did not go unhindered, as a man is reported to have died in the process. Through this hardship, Oakvale was rebuilt and the village thrived once again.

As related in the Tales of Albion, Oakvale continued to play a role in the shaping of Albion's history even after the death of Jack of Blades. It was in Oakvale where the first stirrings of anti-Hero behavior were formed, demonstrated by the animosity some of the villagers displayed to the unknown narrator.

Oakvale is a seaside town with a dock and a few houses on a rise. The pier, like the town, is guarded and you are not allowed to unsheathe weapons inside it, much like any other town. Early in the Hero's time in Oakvale, he comes into contact with the little girl who he helped find her teddy bear at the beginning of the game. Somewhere outside the gate, there is a small sign that commemorates a villager that died in an accident while the town was being rebuilt. The town also has a gate that is guarded. Though by the sea, it is an idyllic farming community. A unique element of the town is a Chicken Kickin' Competition.

The common laws of Albion apply: "Homosexuality, same-sex marriage, and polygamy are universally legal and widely accepted. Extramarital affairs, however, are taboo and the source of much contention among married couples." There is also a law that does not allow you to enter a town with unsheathed weapons as you are deemed a threat and a hazard. Obviously, murder is considered incredibly evil and so is breaking into a house (trespassing), theft or attacking innocent civilians and guards (assault), but the worst that can ever happen to you is a fine and being thrown from the town at the same time. There are also prostitutes in Albion but it isn't explicit as to whether this is legal or not. Oakvale also has strange laws of its own which can be only seen during childhood, such as "Dereliction of sentry duty, despite having been asked nicely" and "Giving of a teddy bear to someone likely to rip off its head".

This cozy house features a single bed and was built on the same spot as the Hero's childhood dwelling.

The westernmost house in Oakvale is a medium sized two story house featuring a ramp up to the entrance. On the top floor, three beds can be found.

This large two story house is the pride of the west side of Oakvale. It has three beds found upstairs. 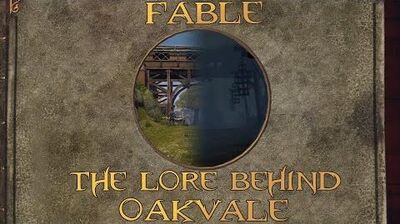 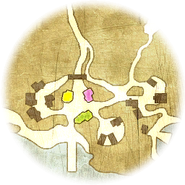 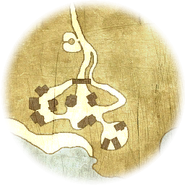 500 years after the events of Fable/TLC, Oakvale was officially destroyed and taken over by the Shadow Court. Two hundred years before the events of Fable II, a young Oakvale villager sold his soul for eternal youth. The Shadow Court killed everyone within the Oakvale region as payment for the young man's request. The boy lost everyone he loved in exchange for his immortality.

With Oakvale vacant, the nearby marshes engulfed the remanence of the village. The vegetation became overgrown. Deadly creatures such as Banshees, Balverines, Hollow Man, and Trolls began dwelling in this area. The Shadow Court now resides in a massive well made out of tombs. Each year, the young man that caused this devastation must send a new sacrifice to the Shadow Court's Judges. This young man is later known to be Reaver, the Hero of Skill, and the Pirate King of Bloodstone.

Oakvale and Barrow Fields eventually became nothing but a bitter memory. The region was later titled Wraithmarsh and became far too dangerous for anyone to live, or even visit there. The port town of Bloodstone is isolated from the rest of Albion due to Wraithmarsh and the ocean surrounding it. Bloodstone is now what use to be, Twinblade's Bandit Camp.

The Oakvale arch bridge is still visible in Wraithmarsh but is slightly condemned and choked by vines. Deep within the marshes, one can find a set of graves that are still eligible to read. There is a grave for the Hero of Oakvale's father Brom, an unknown trader, a victim of the massacre, and the teddy bear "Rosie". Twinblade's Tomb can be found at the end of Wraithmarsh, near Bloodstone.

In Fable II See the Future DLC, the hero may purchase a Cursed Snowglobe from Murgo the Trader. The hero becomes tasked to fix the curse upon the town within the snow globe. Upon using the object, the hero transported to a previous version of Oakvale before it became destroyed. Oakvale is under attack by Coloured Shadows and has stolen the colour from the town itself. It is the hero's job to return the colour to Oakvale. Upon completion of the quest, the townspeople disappear, and the hero transported back to Albion. The hero may return to this area by simply using the snowglobe again.