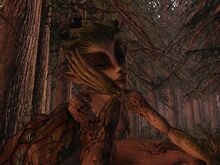 A Nymph is a type of enemy in Fable and Fable: The Lost Chapters. According to the book "Creatures of Albion Book I":

Nymphs are ethereal, yet dangerous creatures. There are three known types. The Water Nymph, the Wood Nymph, and the very powerful Succubus Nymph. All will be eager to send you to an early death if you stray across their path. 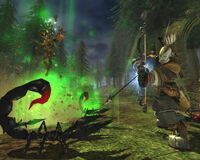 Nymphs are small, winged creatures capable of flight. They appear to be female, possess some degree of intelligence, and are capable of human speech, in a sharp and raspy voice. Their presence is unmistakable, as they have an ethereal glow and a childlike giggle. In combat, they use their wings to fly around swiftly out of harm's way. They spend most of the time as small orbs of light, and are invulnerable in this form. They can only be attacked when they materialise to summon monsters or taunt the Hero. Since they spend most of their time flying out of reach, and only expose themselves briefly, using melee weapons to attack them can be difficult. A charged bow shot will bring them down quickly, but Lightning and Fireball spells are effective, too. Nymphs are weak against fire, lightning, and sharpening augmentations. Their attacks and the types of monsters they summon will vary by type.

Wood Nymphs are the weakest form of Nymphs. They are green with skin that resembles tree bark, and leave a trail of flames when flying. They attack by casting a fireball that causes a thornbush to erupt out of the ground when it impacts, harming its victim. They can summon Scorpions to aid them in combat, and are commonly found in Greatwood.

Water Nymphs are the second weakest form of Nymph. They have pale, luminous blue skin and leave a trail of bubbles when flying. They attack by casting a spell that impacts with the ground and causes an icicle to erupt, harming the Hero. Additionally, they can summon three Hobbes to aid them. They are commonly found in Darkwood, where they can even appear in pairs.

Succubus Nymphs are the most powerful form of Nymph in Fable. They have greyish purple skin and are surrounded by a red aura of flames. They attack at range by casting fireballs that detonate into bone shards when they impact the ground, and can summon three Undead to aid them in combat. They can be found in Witchwood Lake and the Underground Tunnel.

The Succubus Queen is a type of Nymph that can only be found in Fable: The Lost Chapters. A description is given in the TLC-exclusive book "Creatures of the North", which reads, "Related to the Nymphs of mainland Albion, though many have found them more resilient. Their death is not brought about easily. They are able to conjure up what local people call Wraiths...". They can only be found in The Northern Wastes; specifically, they can be encountered in the Northern Wastes Foothill and Archon's Shrine, but only in rare instances. Their skin is a deep purple with bright yellow markings, and they leave a black and purple aura in their wake. They are tougher and deal more damage than other Nymphs, and can summon Wraiths, which are formidable opponents themselves. 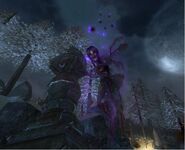