The Necropolis is a location in Fable: The Lost Chapters and Fable Anniversary. It was once a sprawling city in the Northern Wastes. Now reduced to rubble by time, the ruin plays host to a large number of its former inhabitants who still roam its streets despite being long dead. The Necropolis used to be a town, as lively and prosperous as any other, until an inhabitant made deals with eldritch powers from beyond the world. Because of the selfishness of this one person, the entire town was annihilated. It happened so quickly, that many of the citizens of the city have not realized they are dead yet. These ruins are also rumored to be the home of the Glyphs of Inquiry, four important tablets that have instructions to use the dormant Oracle. The people of nearby Snowspire refuse to enter the Necropolis for fear of its ghostly dwellers and zombies patrolling there.

The entrance to the Necropolis is found in the Northern Wastes Foothill; it is the northernmost gate. Guards apparently have a post here, since access to the Necropolis is denied to travellers until the quest Oracle of Snowspire is taken. When the Hero visits the Necropolis for the first time, a guard will explain to him what happened to the town.

The town features a Demon Door which contains a Legendary weapon, The Bereaver. To acquire this the Hero must forfeit all silver keys. If the Hero avoided obtaining any silver keys prior to meeting the door, he will accept that and open straight away.

There is also a Silver key chest in the Necropolis. It requires 25 silver keys to be opened and contains the Archon's Battle Armour.

The area is very desolate and the Hero may encounter the ghosts of the former villagers along with some corpses and graves. The ghosts can be heard talking, asking themselves what happened, where everyone is and things they still have to do, although they are already dead. Several enemies live in this area, including frost Balverines, Wraiths and an ice troll.

The Haunted Necropolis was once a thriving city, until an unknown cataclysm turned it into a ghost town.

A Frost Balverine in Necropolis 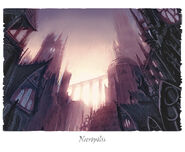