The Murren Greathammer is a legendary greathammer in Fable, Fable: The Lost Chapters, and Fable Anniversary.

Found in the Heroes' Guild silver chest. This chest is the hardest to open in the original Fable, requiring 20 silver keys.

Note: If playing the original Fable, the Murren Greathammer becomes unavailable if not acquired by the time the Hero accepts the Try to Stop Jack of Blades quest card.

The Murren graves were robbed during the collapse of the Old Kingdom. This Greathammer and a Greataxe were never recovered. Both are said to be forged by the wills of the gods themselves. 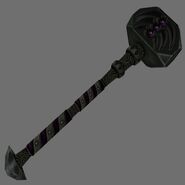 Retrieved from "https://fable.fandom.com/wiki/Murren_Greathammer?oldid=126744"
Community content is available under CC-BY-SA unless otherwise noted.