Mourningwood is a region in Fable III. It is a marshy region, and appears to be the new cemetery for the city of Bowerstone. Major features include an eco-warrior settlement, Mourningwood Fort, a Demon Door, the Dark Sanctum, and the entrance to Sunset House. It is inhabited by Hobbes and Hollow Men.

Mourningwood is a wilderness area, and so does not have a guard patrol. The Swift Brigade of the Royal Army are initially stationed at Mourningwood Fort, but vacate the post in short order. A few shops can be found in the eco-village which serve to bring income into the area through passing trade.

Mourningwood Fort is an outpost for King Logan's army found in the eastern part of the region. The soldiers are led by Major Swift and his second-in-command, Ben Finn. During the main story line, the Hero of Brightwall is required to gain the loyalty of Swift and his men. After the Hero aids in the defence of the fort from the Hollow Men that plague the region, Swift, a close friend of Walter Beck, agrees to fight with him/her so long as the Hero promises to restore the old, more honourable guard.

The Hero can return to the fort, after meeting with Page in Bowerstone Industrial, to find it deserted and up for sale. If the Hero buys the fort, they receive a letter from Major Swift stating that the Swift Brigade withdrew after their victory over the Hollow hordes. Buying the fort also allows access to the mortar mini-game. Like the mortar mission in the main storyline, this mini-game involves racking up points by destroying waves of Hollow Men attackers. It uses a point system similar to that of the Shooting Range in Fable II, with 2000 points earning the grand prize (a legendary weapon).

"One of those self-sufficient communities. They hold hands, eat fruit, and talk about peace a lot. It's a real party town."

Eco-Warriors inhabit the western part of the region. Their settlement is near the end of the Bowerstone sewer outlet leading to Bowerstone Industrial, and much of the city's sewage is dumped there by Reaver Industries. The village has two houses and three shops surrounding a central tree. The Mellow Emporium and Organic Ink are closest to the Bowerstone sewer, and Peas and Love is located next to a small platform where a Blacksmith job can be taken. A third house is situated in the back corner of the village next to a ruined wall.

Mourningwood is the region that contains the greatest amount of gravestones of any Fable game, with 120 located at the cemetery and four other at the Fort.

Between the two paths heading towards the Fort

The Ossuary is an extension of the Mourningwood cemetery. Located beyond a crypt at the end of a side-path leading from the main cemetery area, it is the central location of Gone But Not Forgotten.

The Dark Sanctum lies beyond a firey barrier near the fort. Speak to Lesley to find out how to gain access.

Future of the Eco-Village[]

Depending on the Hero's decisions as ruler of Albion, Reaver Industries begins either dumping all of the sewage at the village, or ceases the dumping completely, in favour of a recycling facility. If the decision is made to begin dumping the entirety of Bowerstone's waste into Mourningwood, the camp becomes flooded with ankle-deep sewage and a putrid green fog hangs in the air, and Reaver refers to it as the 'Mourningwood Sewer Reservoir'.

This Demon Door, located just east of the eco-village, complains that the world is eternally infested with war. He claims that the only way to end the cycle is to create an all-powerful weapon. To open this door, the Hero must pull out a Level 5 Melee or Ranged weapon in front of the Demon Door.

Inside the door is Planet One, a desolate area with a single chest and a strange machine. The chest contains the full Military Suit. The Hero is able to interact with the machine; doing so changes the planet's colour scheme. 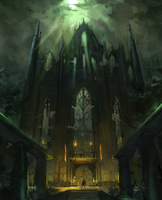