Miremoor is a farming region in the eastern Edgelands traversed during Fable: The Journey. As the name implies, the majority of the region is sparse moorland, dotted with many ruins now home only to rockmites and hobbes. During the journey through Miremoor, Theresa explains that the ruins of Miremoor are all that remain of a once-bountiful community built by Heroes who, opting for an easy way to enjoy success, channeled their Will power to create and harvest abundant crops. Unfortunately for these Heroes, the ease in which they built their city resulted in a weak infrastructure, which saw the city consumed by the lands that they sought to settle. There are a few run-down communities on the moor, most notably the farm at Honeyholm and the village of Dunecrest in the foothills. Harvests are consistently poor, and following the opening of Reaver's Reach, passing trade has drastically reduced as well.

Although a part of the distant Edgelands, Theresa reveals to Gabriel that she passed through Miremoor after the death of Jack of Blades before moving on east, towards Samarkand.

The main road in Miremoor runs atop of the countless canyons of the region. It is spotted by many ond ruins. The most notable threat of the road is the sudden wind blows that busrt in narrow parts of the road which can cause a sudden fall from the cliffs. 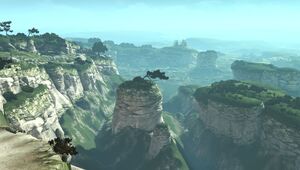 Miremoor's cliffs
Add a photo to this gallery

Miremoor Henge lies in the centre of the region. Once a landmark with an unknown history, the henge now marks the entrance of Bladebarrow. The nearby ruins have been overrun by hobbes, who have turned the area into an arena of sorts. Behind the arena lies the ominous stonework of the henge itself.

Hammer's Rest is a large walled campsite situated on the flat land in front of Miremoor Henge. The campsite contains a hitching post, a water trough, a few trees and a small stone hut.

Honeyholm Farm is a small settlement in the Miremoor foothills. Their honey was renowned for its healing properties, but a fiasco involving crossbreeding resulted in the farm being closed down. Nests of stingers leave an impression of the extent of the tragedy.

A desolate mill marks the entrance to the village once known as Dunecrest. The village was a trading destination for the farmers of the moors, but like Woodseed and Prickledown, the inhabitants have since moved out. All that remains is a number of run-down houses and the occasional burning pile of rubble.

Retrieved from "https://fable.fandom.com/wiki/Miremoor_(Location)?oldid=150159"
Community content is available under CC-BY-SA unless otherwise noted.