Minions are a type of enemy in Fable, Fable: The Lost Chapters, and Fable Anniversary. According to the book "Creatures of Albion Book I," Minions were brutal and merciless killing machines bred by the Old Kingdom Wall-Guards to attack intruders. During the events of Fable, Minions are the demon servants of Jack of Blades. They are heavily armoured, excellent fighters and very hard to kill. There are two different kinds of Minions. Both kinds are vulnerable to fire, so the Enflame spell is effective against them.

These are the standard type of Minion. They have rust brown armour and long double bladed swords. They have heads that resemble jackals and their backs are always hunched. In combat, they are excellent blockers.

Dreadwings are the spellcasters of the Minions. They wield staffs that they can use when under attack at close range, but prefer to attack at a distance with an energy spell. The Dreadwings can also generate a prison made out of magic, but this is only seen once and is never done in combat. Dreadwings can also summon others of their kind or Wardogs so be sure to take them out first. They have black, silver, and blue armour and a curious helmet with a pointed visor that resembles a beak. 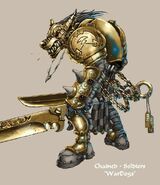 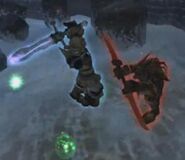