Maze is a key character in Fable and Fable: The Lost Chapters.

Hailed from the secluded shores of Hook Coast, Maze was once a powerful wizard, showing remarkable powers of Will. He was also leader of the Heroes' Guild, even above the Guildmaster. However, Maze had a terrible secret that forever decided his fate: Maze was actually in the service of the demonic Jack of Blades after the villain saved the wizard from death in his youth. Forever in debt to his savior, Maze served his master for years, but as he grew older, Maze knew his usefulness would eventually run out and Jack would have him killed.

However, Maze finally found his solution on the very same day he was forced by Jack to lead a bandit raid on Oakvale where he found a young boy who would later grow up to become the Hero of Oakvale. Sensing greatness within the boy, Maze saved the boy from death and took him to the Heroes' Guild to train and become a Hero. By training this young boy to become the greatest of all Heroes, Maze hoped this very same boy would be the one to finally destroy Jack of Blades and free Maze from his enslavement. Sadly however Maze's dreams died over the years as he lost all hope in the Hero of Oakvale and believed he wasn't strong enough to stop Jack, leaving Maze once again forever enchained.

During the Hero of Oakvale's quest to find the Septimal Key in Hook Coast and stop Jack from finding the Sword of Aeons, the Hero discovered Maze had captured the Hero's sister, Theresa. Maze tried to lie his way out only for both Theresa and Jack to reveal his true evil allegiance, the latter of whom was more convincing. With that, the Hero was trapped by Jack in a magical cage and Maze completed the ritual thus giving his master the key he needed to find his sword. After Jack left and before Maze took the siblings to the Chamber of Fate, Theresa with her remaining power managed to free her brother from his cage. Maze then attempted to kill his former apprentice but was defeated and killed. Before dying however Maze apologized for his actions and admitted he was right to have faith in his apprentice as long as he is indeed strong enough to stop Jack. With that, Maze died, at peace with himself.

Following this, the Hero of Oakvale defeated Jack of Blades and destroyed his mortal body as well as saved his sister, gained the chance to use the Sword of Aeons for himself and avenged his mother, Scarlet Robe thus saving Albion from a terrible fate and avenging Maze.

As a young boy, Maze's parents were killed by Balverines, but Maze was saved from certain death by Jack of Blades and two Heroes (Jack killed the Balverines that were about to kill Maze, and then proceeded to slaughter the Heroes in a show of strength). Maze felt he was forever in debt, and was never able to escape from Jack's shadow.

Maze was an extremely powerful Will user who had many abilities. These included all the average Will powers to their highest degree and many of his own. All in all he was one of the most powerful beings of his time, surpassed only by Jack of Blades and the Hero of Oakvale. Scythe and the Guildmaster could have matched or surpassed Maze's capabilities as their Powers are unknown but heavily implied to be very great.

Maze has mastered most of the Will spells that the player in Fable/TLC can learn. His mastery of Will spells goes beyond that which the Hero of Oakvale can obtain in-game. For example: when Maze used the Enflame spell, it had a large area of effect and he could even cast it while moving or jumping. The abilities he is not shown using are: Slow Time, Summon and Ghost Sword.

In the Xbox LIVE Arcade title, Fable Heroes, Maze appears as a playable character. He can be unlocked by Garth on the Hero Tile of the Abilities Board. His default weapon is a Lightning Spell Gauntlet, which can later be upgraded and weaved with a Force Push Spell Gauntlet.

Maze was one of the most powerful Will users the Heroes’ Guild had ever seen. From a young age, however, he was bound in service to Jack of Blades, and for all his abilities was unable to free himself from his master’s dark shadow. As a Hero Doll, Maze prompts us to reflect on humanity’s overwhelming fear of death; the depths to which a good man may sink when confronted with his own mortality; and how funny we’d all look with big googly eyes.

— Description of Maze from Fable Friday 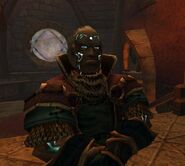 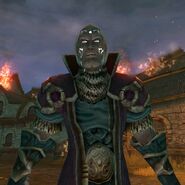 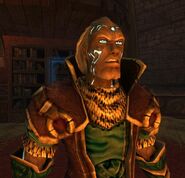 Fable The Lore Behind Maze